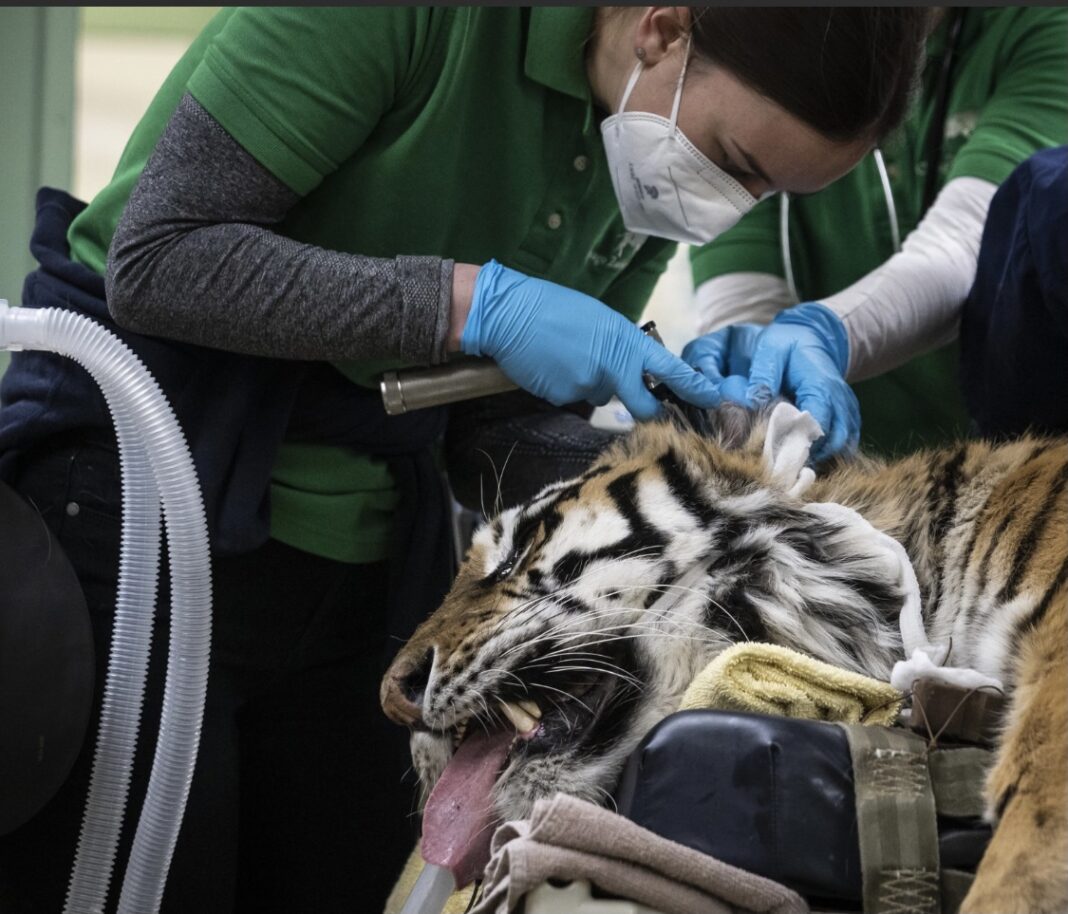 A 10-year-old Amur tiger with arthritis underwent hip replacement surgery at a zoo outside Chicago on Wednesday, and her surgical team is confident the procedure will add years to her life.

Veterinarians at Brookfield Zoo noted that, like humans, animals routinely develop degenerative problems in their joints as they age. When the tiger, Malena, arrived at the zoo last year, she had already been diagnosed with arthritis of the hip and was receiving pain relief medications.

“We’re hopeful that by doing the surgery now, we’re able to really get on top of this arthritis and keep her comfortable so that she’s able to live a good quality life for many years down the road,” said Dr. Michael Adkesson, of the Chicago Zoological Society.

Orthopedic surgeon Dr. James Cook, of the University of Missouri, who led the surgery team, said the 6.5-hour surgery was very challenging and took longer than expected. But he said the operation was a success and that the tiger seemed to have full range of motion in her hip after the procedure.

“The first six weeks are critical, but we’ve given it our best shot and are pleased with the result,” Cook said.

A CT scan determined that veterinarians wouldn’t be able manage the tiger’s hip and keep her comfortable without performing surgery.

“We’ve got to replace both parts, the ball and the socket, and we’ve got to do that in a really minimally invasive way so that we protect her musculature and give her the best chance of recovery,” he said before the surgery.

Malena is not the first tiger to undergo total hip replacement. Previous attempts with non-custom implant designs in a snow leopard, a cheetah and a tiger in Germany have had mixed success.

According to Adkesson, the post-operative period is going to be challenging because of the need to keep Malena quiet and calm.

“Obviously, from a therapy standpoint, we’re not able to get in with the tiger the same way we might do physical therapy on a dog or a domestic cat,” the veterinarian said. “But our care staff have a wonderful relationship with these animals, and they’ll be able to get her up and kind of moving around by asking her to come to different areas of the enclosure.”

Amur tigers — also known as a Siberian tigers — once roamed in Russia and China, but are now endangered; Their population in the wild is estimated between 500 and 600 animals.