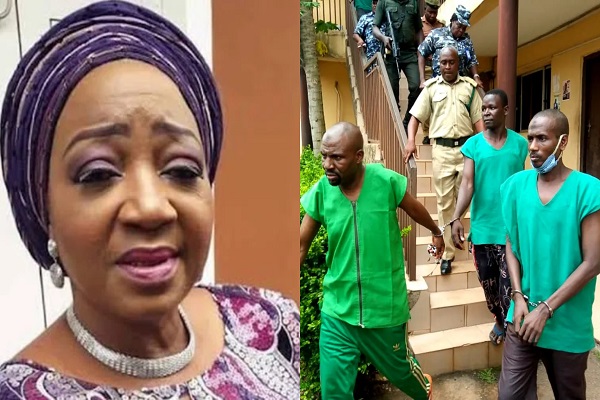 An Ondo State High Court sitting in Akure has sentenced three out of the four persons that killed Olufunke Olakuri, daughter of Afenifere Leader, Reuben Fasoranti to death by hanging.

The trial Judge, Justice William Olamide, however, discharged and acquitted one of the accused who is the public relations officer of Miyetti Allah, Auwàlu of the offence of aiding and abetting the kidnapping.

Justice Williams Olamide in his judgment today said the 1st to 3rd Defendants in the criminal trial were sentenced to death for conspiracy to commit armed robbery, kidnapping and murder.

Facing trial in the said case of murder and kidnapping in charge No: AK/111C/2020 are Mohammed Shehu Usman, Mazaje Lawal, Adamu Adamu and Auwalu Abubakar.

The State prosecuting team was led by the Attorney General of Ondo State, Sir Charles Titiloye, while the Defendants were represented by K. A. Gbadamosi and A. N. Obafemi Bawa and others.

The prosecution called 9 (nine) witnesses which includes, the husband of the deceased, the medical doctor who performed the autopsy, the driver of the deceased who was present at the scene of the crime and the Prime witness, the driver in the back up vehicle, Femi Ajayi who was kidnapped by some of the defendants and who positively identified them during the investigation and trial in the Court.

Also led in evidence during the trial of the case are the investigating Police officers who arrested the Defendants through intelligence reports after the Defendants were caught with firearms at a Police Checkpoint in Edo state.

The Counsel who also witnessed the taking of the confessional statements of some of the witnesses was also called in evidence.

The prosecution tendered in evidence at the trial the confessional statements of the Defendants and firearms recovered from the defendants.

The 4th Defendant, Auwalu Abubakar was however discharged of the offence of aiding and abetting kidnapping.

Reacting to the Judgment, the Attorney General of Ondo State Sir Charles Titiloye , commended the trial Court for the well-researched and thorough Judgement, he assured the citizen of the state that the Governor of Ondo State, Oluwarotimi Akeredolu SAN would continue to ensure the protection of lives and property and bring to book all perpetrators of criminal acts in the state.

Fasantanti’s daughter was killed in July 2019 by suspected herdsmen in a kidnap attempt, shot and killed her. She was the second daughter of Afenifere leader, Reuben Fasoranti.

Police spokesman, Femi Joseph, at the time said the incident occurred between Kajola and Ore along Ondo-Ore road.

Afenifere’s spokesperson, Yinka Odumakin, now deceased, had explained to newsmen that Fasoranti’s daughter was killed by Fulani herdsmen who emerged from the bush, shot her and killed her in the process.

Odumakin said Mrs Olakunrin was travelling from Akure to Ore when her vehicle was attacked alongside others.

“It happened at a spot between Kajola and Ore, where some hoodlums numbering about 15, attacked two vehicles, 1 Toyota Land Cruiser and 1 Camry,” he said in a report published by Premium Times.

“The the Land Cruiser was carrying five passengers, including the deceased, which we later identified as one Funke Olakunrin. They shot the woman, and we rushed her to the hospital, but we lost her. Other four occupants that were abducted, we have rescued,” he said at the time.