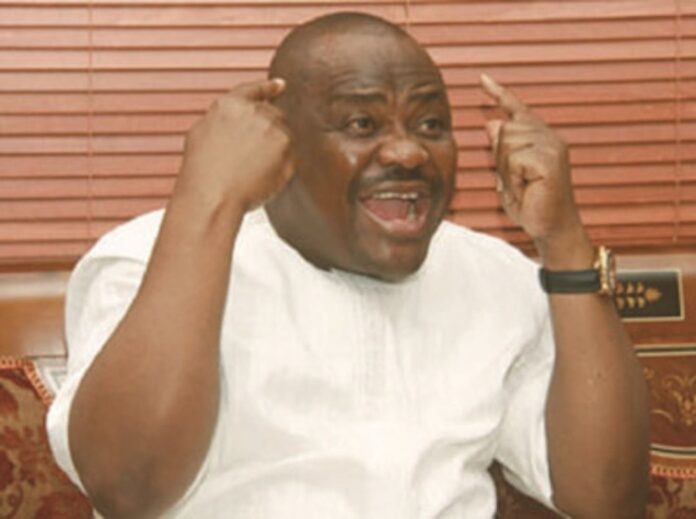 Governor Nyesom Wike of Rivers State yesterday threw caution to the wind and openly lambasted the deputy governor of Edo State, Philip Shaibu, for daring to say he would leave the Peoples Democratic Party (PDP), asking rhetorically, “Who is your father”?

Speaking at the inauguration of the eastern bypass road project in Port Harcourt, Wike said the PDP gave Godwin Obaseki and Shaibu the party’s ticket when they were denied the same by the All Progressives Congress (APC) during the 2020 state election.

“Threatening the party, that there are alternatives to PDP. This is the same people that were kneeling down to beg for us to give them the umbrella, today you have the effrontery to threaten the PDP. Such a shame. These are the same people when they were denied tickets under APC, they were running helter-skelter begging everybody to give them an umbrella and we gave them an umbrella,” he said.

“And he lost his local government when we were in Edo, he lost. And he would come out on television to threaten the party that there are alternatives, look at the deputy governor, it’s unfortunate.”

Shaibu had appeared on a Channels Television programme where he said he and Obaseki may leave the PDP if the party continues to treat them as outcasts.

Wike said he has written to the leadership of the party at the national level to discipline the deputy governor for the comment.

“It’s very unfortunate for our party, a deputy governor is wearing khaki, look at it, I’ve never seen a thing like this in my life. This is the first time I can see a deputy governor come out on the television to tell the party if you don’t do this… who is his father?”

“Let him come and threaten a whole party where we are as governors, now that he has started the trouble, let him note, we will make sure he never have rest. You don’t come and threaten us, it won’t work and it will never work.”

The Edo PDP has been rocked by an internal power struggle since Obaseki, Shaibu, their political allies and supporters defected to the party.

Obaseki won the PDP ticket in Edo and got re-elected for a second term in 2020, after his former party, the APC, had refused to allow him to contest the party primaries because of his political battle with Adams Oshiomhole, the then national chairman of the APC.