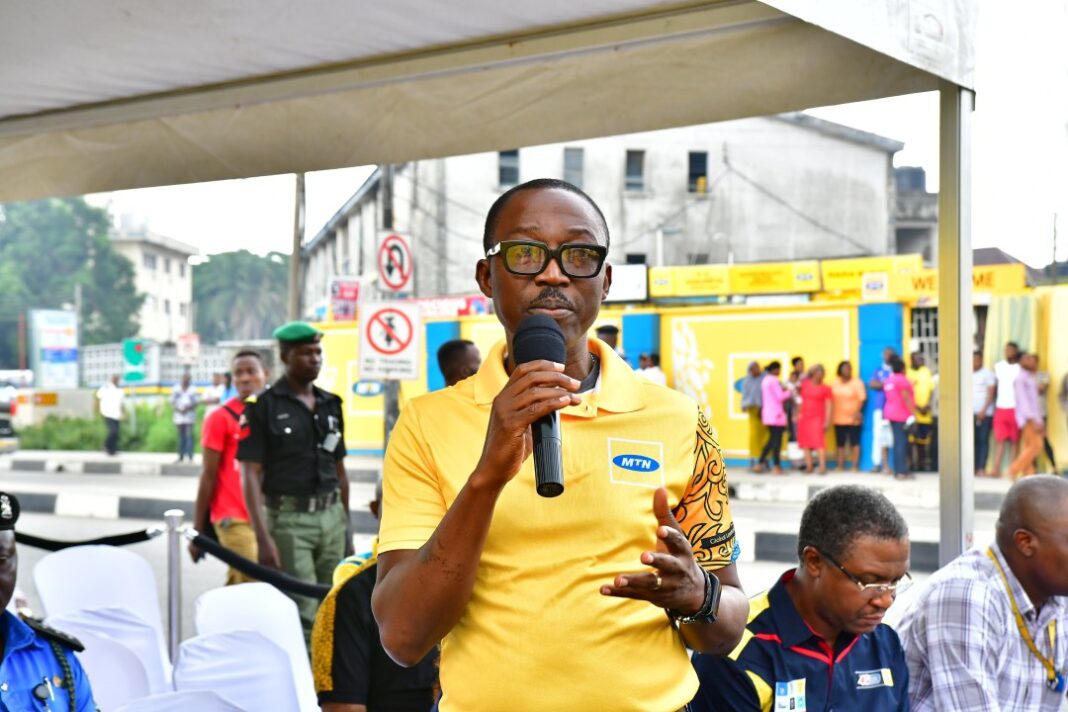 His resignation is coming on the heels of sexual harassment and unwholesome practices leveled against him by some female staff of the company.

Although he claimed to have resigned to pursue fresh opportunities, sources however said he was given a soft landing and asked to resign so as to preserve the reputation of the company.

Some aggrieved workers under the aegis of ‘The Anonymous Whistle Blowers’, had accused Adebiyi of being a sexual predator.

He was alleged to have used his position within the telco “to sleep with young female staff.”

In a series of emails and documents sent to MTN Group’s headquarters in South Africa between April 2021 and February 2022, some female employees of telecommunications company, who hid their identities and only described themselves as ‘The Anonymous Whistle Blowers’, accused Adebiyi of being a sexual predator in the habit of using his position in the company to sleep with young female employees.

They also accused him of threatening such women with sacking if they fail to give in to his demands.

The aggrieved employees also alleged that Adebiyi had been using his position to plant family members and friends in key units of the telecommunications company even when such persons clearly lacked the requisite educational qualification and skills to occupy such roles.

The whistleblowers also accused the Chief Sales and Distribution Officer of inflating contracts, receiving kickbacks and inventing false sales figures to deceive the company’s management and continue to keep his coveted role.

According to the employees, Adebiyi, despite his gross misconducts and acts of corruption and sabotage against MTN Group, had the full backing of MTN Nigeria Chief Executive Officer, Karl Toriola, and other top officers in the company.

In some of the emails sent to Nerisha Singh, General Manager, Forensic Services, of MTN Group, by ‘The Anonymous Whistle Blowers’, the aggrieved employees said, “We are writing because the man, Adekunle Adebiyi, who heads sales, is a dangerous threat to your company. We wish men like Adekunle Adebiyi will not destroy MTN Nigeria. You left a monster and sexual predator to continue in office but after one year, we can no longer be silenced by his continued intimidation.

“Many of us became victims of his boastful abuses and direct punishments. Three persons resigned in S&D through his intimidations and threats. Kumar Abubakar, a resourceful Senior Manager, was fired by him and Amina, his GM in the North, on trumped-up charges because Kumar knows all their fake and forged gross connections, numbers and sales figures. They know he would expose them to forensics.

“Sales conferences are always his grounds for his sexual escapades where he uses his front and power to lure young innocent MTNNers levels 1, 2, 3, vulnerable girls into sex.

“Your sexual harassment policy is not protecting levels 1, 2 or 3 or young girls. They are victims of Adekunle Adebiyi’s sexual harassment. They can’t talk or report him because they will lose their jobs. We have many cases reported to close friends instead of HR because they don’t trust HR.

“His bribery and corruption with NIMC Nigeria, collecting money from vendors through his fronts and flooding MTN Nigeria with his family and friends as SIM registration agents have continued.

“Adekunle is a bad egg. His corruption is beyond imagination. One of our anonymous members shared a message from him to a finance staff member compelling them to pre-pay a vendor for a big contract, so he can collect his bribes upfront.

“He gives contracts to vendors abroad at higher costs because of money they want to collect as bribes. Procurement staff and Finance team know this but could not report until some of them joined this “whistleblower” group. Yet they are still afraid because our jobs are threatened by these men who work for Adekunle.

“Check the employments of his many relatives, especially of Ekundayo Fatoki, Customer Acquisition Manager. He failed interviews but Adekunle and his cohorts brought him in re-conducting the interviews two times or more times. The two ladies he sexually harassed are now afraid, too, to come with proof because our jobs are not safe. We are scared and our lives are at risk. Adekunle and his cohorts are powerful and can exterminate us if they have to.

“Two board of directors are his men. Cyril Ilok, head of forensics, is his womanising and drinking partner, who will never allow all the petitions from the staff to go through investigations.

“The people had videos of when his fronts collected the money as bribes unfortunately, they were threatened and fired. The two former staff members are still alive if you want to investigate.

“He virtually uses his fronts and his friends to pitch all the works for customer acquisitions, supplies of MTN airtime and merchandising from the time he was acting as sales and distribution executive till now, money running into billions of naira.

“He can continue to tell lies to Enzo Scarcella, the Group Chief Consumer Officer, his team or Jens in South Africa or even the COO in Nigeria; we know he is a fraudulent man with figures.

“He has boasted to vendors and trade partners as long as Cyril Ilok and Karl Toriola are in MTN Nigeria, nothing will happen to him.

“As at today, MTN Nigeria has over eight court cases of former trade partners Adebiyi removed or terminated their appointments in manners that left a lot to be desired.

“Fire or remove Adekunle Adebiyi before you pay another fine or get into Nigeria’s murky waters.”

The whistleblowers further alleged that Adebiyi used proceeds of his corrupt dealings in MTN Nigeria to purchase a house in Manchester, United Kingdom, and also build a multi-million naira state-of-the-art school for his wife in Lagos.

“How much does he earn as an executive in MTN that he bought a house in Manchester, UK, including the big school he built for his wife in Lagos,” the aggrieved employees added.

Responding in an email to the allegations made against Adebiyi by the employees, Singh said, “We assure you of our prompt attention to all the concerns raised and that the matters raised will be fully investigated.

Also, another set of aggrieved workers under the aegis of ‘Anonymous Concerned Staff of Sales and Distribution Division’ have in an email sent to the leadership of MTN Group in South Africa and MTN Nigeria, alleged that Adebiyi, General Manager of Northern Regional Operations, Amina Dambatta, and some other senior officers of the organisation are involved in shady deals.

The email partly reads: “We, the concerned staff of Sales and Distribution Division in the Northern region of Nigeria, write to bring to the attention of MTN Group and MTN Nigeria Communication Plc’s Board, Management, Risk and Compliance division about key conflict of interest, fraudulent activities, sexual harassment and threat of dismissal that has continued to be pervasive in the Northern region. Due to fear of victimisation, staff in the North are too afraid to speak.

“Here is an example: in the Sokoto area, Munifaz, Gobir Jega and Amali are three dealerships in Sokoto, Kebbi and Zamfara states and they are all owned by the same person and Amina has interests in all three.

“She and Adekunle Adebiyi facilitated the granting of dealerships to the same person under three different names, disguising themselves as different persons against MTN conflict of interest policy. The owner of this company has also not declared to MTN that he is the owner of these three competing companies.

“Nobody ever questioned why Amina and Adebiyi approved for one person to own three different dealerships without it being declared to MTN Nigeria for transparency.

“This conflict of interest that Amina and Adebiyi have is the reason why Gobir Jega and Munifaz got away with fraud. Their staff defrauded MTN Nigeria to the tune of N17 million and N13 million respectively but they were treated with a mere slap on the wrist.

“Amina insisted on giving a waiver of 50% on the total amount to be recovered. How can a waiver be granted in fraud recovery? When that was not approved by Legal, Amina recommended a payment plan of 10 years.

“Why would someone defraud MTN and they are given 10 years to pay back when they should be delisted/dismissed and asked to pay immediately? Why are they being retained as dealers?

“Another area of conflict is that BENJEE is the trade partner in Sokoto and Kebbi states and this is owned by Amina and Kunle Adebiyi. The same people also own Nagwari Ltd., a customer acquisition partner in the three states.

“The entire S and D staff in Sokoto, Kebbi and Zamfara are aware of this but they are too afraid to speak up as they are constantly being threatened with disciplinary hearing or redeployment to states with security challenges. Nobody wants to be redeployed to such states, so they stay mute.

“These trade partners where Amina and others have interest earn tens of millions each month. They earn more than other partners and they don’t contribute as much as the others in terms of gross connection, revenue etc.

“Other partners in the region feel there isn’t a level playing field as preferences are given to the dealers and CAPs that Amina and Adekunle Adebiyi and Abdulhamid have interest in. The other partners cannot run to Amina because rather than being an unbiased umpire, she sees them as competitors because they are competing with CAPs and dealers where she has a stake.

“Another complaint we want to make is in the area of gross connection. The partners and CAPs where Amina has interest engage in fraudulent gross connection activities. This is called kitchen activation. They buy SIM cards at N50, register them using a few people, load N3 to do chargeable activity and they will automatically earn N180 for each SIM. They do this with thousands of SIM cards daily and when they are done, they earn millions for gross connection. A month or two after, these SIM cards will be seen as having churned out of the network. Then they go back to the same circle, earning millions for fraudulent practices.

“All managers and above that resigned or took VSS in S and D in the North in the past three years left because they questioned these practices and were victimised.”