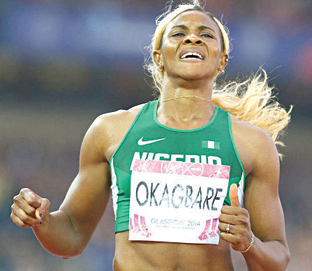 Nigerian top sprinter, Blessing Okagbare, 30, has been slammed with a 10-year ban by the Athletics Integrity Unit. AIU.

According to Brett Clothier, head of the AIU, the ban was “a strong message against attempts to cheat”.

She was a medal contender for the women’s 100m in Tokyo last year and won her heat in 11.05 seconds but she was ruled out of the semi-finals after the AIU said she had tested positive for a human growth hormone following an out-of-competition test on 19 July.

After almost seven months of no verdict by the AIU, an outright ban has now been placed on Okagbare who remains Nigeria’s most successful athlete in recent times and one of Africa’s best too

According to the details of the ban, Okagbare was slammed with a five-year ban for the presence and use of multiple prohibited substances and five years for her refusal to cooperate with the AIU’s investigation into her case.

Okagbare has 30 days to appeal against the AIU’s disciplinary tribunal’s decision at the Court of Arbitration for Sport (CAS).

Okagbare won a silver medal in the long jump at the 2008 Olympics and has also won World Championship medals in the 200m and long jump.