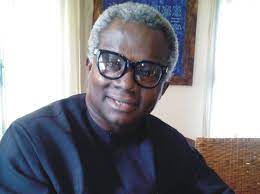 Outspoken director-general of the Voice of Nigeria (VON) Osita Okechukwu has been detained by the Economic and Financial Crimes Commission (EFCC) on Saturday.

Okechukwu was at the forefront of Nigerians asking the Buhari administration to release the leader of the proscribed Indigenous People of Biafra (IPOB), Nnamdi Kanu. He also lent his voice in the debate on the controversial electoral bill.

He reportedly arrived at the EFCC headquarters in Abuja around 1:30 pm on Saturday, following an invitation regarding a case of alleged conspiracy, abuse of office and misappropriation of public funds.

He is said to be undergoing questions for allegedly embezzling N1.3 billion.

As of the time of this report, he was still in the custody of the EFCC.Advertisement

When contacted, Wilson Uwujaren, EFCC spokesperson, confirmed that the VON DG was invited by the commission.

Uwujaren, however, declined further comment on why Okechukwu was invited.