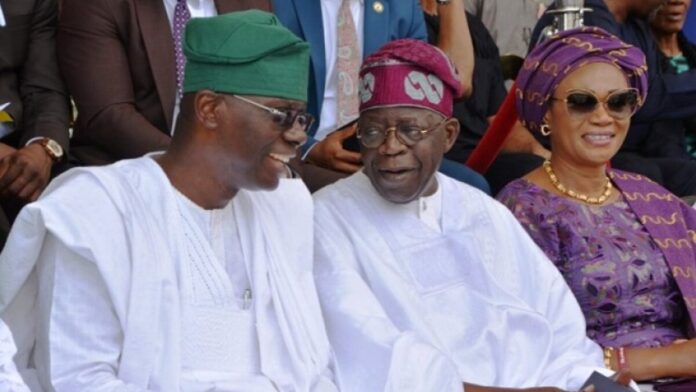 Governor Babajide Sanwo-Olu of Lagos, on Thursday, declared his commitment to the presidential ambition of Asiwaju Bola Ahmed Tinubu, the national leader of the ruling All Progressives Congress (APC), describing him as the best candidate for the job.

Sanwo-Olu said Tinubu’s qualification rests on his demonstrated capacity in deploying a mix of genius and statecraft to nurture a city on the brink to a flourishing economy.

He noted that the progress in Lagos remains a visible experiment initiated by the APC National Leader.

The Movement was conceived and set up by members of Governor’s Advisory Council (GAC) in Lagos for the actualisation of the presidential ambition of the former Lagos Governor.

The governor was at the event in company of his deputy, Dr. Obafemi Hamzat, Speaker of the House of Assembly, Mudashiru Obasa, and all members of the State Executive Council.

Also, APC leaders across the State’s 57 local councils and a large number of party supporters thronged the event’s venue to lend their support.

The governor said: “Our country is the most populous black nation in the world and the responsibility that comes with that is enormous. No doubt that the destiny of the entire black race is tied to the greatness of Nigeria. If our country must be great, we have the responsibility to choose the leadership that will bring about true transformation across every facet of our national life. Who is that rallying figure that should lead us in this journey?

“The answer is deeply connected to our mission and purpose here today. That person must be a detribalized Nigerian and a bridge builder, who has been tested and trusted. A thinker who must sustain the legacy our current president is leaving behind. That person is the reason we are inaugurating this Movement for the actualisation of his presidential ambition. That person is our great leader, Asiwaju Bola Ahmed Tinubu.

“Let us tell the naysayers and those who are still in doubt that we are ready to work for the realisation of this ambition, because Asiwaju Bola Ahmed Tinubu is the Number one saleable candidate for the president. We will preach this gospel with diligence, dedication and high sense of commitment. Asiwaju is an unfolding success story our nation deserves at this time.”

Sanwo-Olu said the event was to raise foot soldiers, team leaders and cheerleaders who would pursue the Movement’s objectives and cascade down its messages to every voter at the ward level with commitment and passion.

APC stalwart, Cardinal James Odumbaku, said the electorate must get it right by electing a tested and credible leader to steer the leadership of the country, stressing that the movement believed Bola Tinubu remains the right man for the top seat.

GAC leader, Prince Tajudeen Olusi, described Tinubu as “a genius” in statecraft, saying the APC National Leader is a saleable article in the political market.

The Movement’s Director-General, Hon. Oyinlomo Danmole, said ABAT structure was different from other support groups set up across the country for the actualisation for Tinubu’s presidential ambition.