Igboho to Buhari: We’d not give up our ancestral land for herdsmen… don’t intimidate me for defending my people 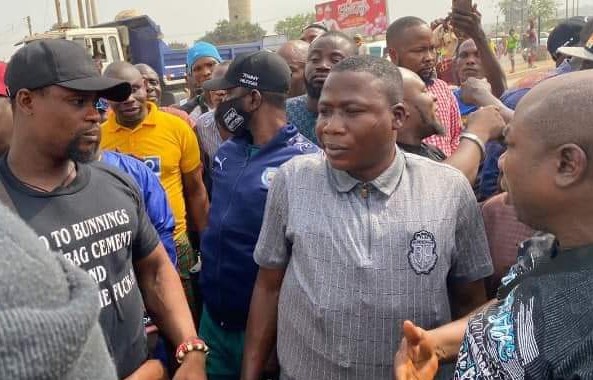 Self-determination activist, Sunday Adeyemo, popularly known as Sunday Igboho, has vowed that Yoruba people would not be intimidated to give up their ancestral land to local and foreign herdsmen, notwithstanding the bloody raid on his residence by operatives of the Department of State Services (DSS) on Thursday morning.

Fedredsnews had reported the commando-style raid of Igboho’s residence by a combined team of the DSS and the army in the early hours of Thursday. The raid was initially ascribed to “unknown gunmen”, but the DSS later released a statement, claiming responsibility. The Service claimed that arms, ammunition and charms were allegedly recovered from his house.

However, speaking in a statement issued on Friday by Olayomi Koiki, his media aide, Igboho denied ownership of the items said to have been recovered by the DSS.

Igboho also said he hasn’t committed any crime, adding that his focus has been on ensuring peace in the south-west region by kicking against “criminal herders”.

“The invasion was done without a search warrant. I was not invited for questioning/investigation at any government facility before the invasion,” he said.

“Nigerians and the world at large are aware of my resistance to the incessant killings, raping and kidnapping of my people in Southwest Nigeria by armed Fulani herdsmen.

“Of public knowledge, my intervention has not led to any loss of life or bloodshed. My means of curbing criminality is to the chase the criminal Fulani herdsmen out of their hideouts in company of the people of the affected communities.

“It is because of the foreseen government persecution that videos of such interventions were transmitted live on social media. Nigerians, the security operatives, and the presidency are aware that I have never moved against the peaceful Fulanis and other tribes living peacefully in the Southwest. My unjust persecution — for defending my people and community — is therefore surprising and unwarranted.

“Nigerians and the international community should please be aware that the security operatives that invaded my home either planted the ammunitions being paraded in the media in my home or harvest them from their armoury to frame me. The arms paraded are not mine; they are government magic. I protect myself with traditional powers, not with guns.”

While condemning the raid on his home, the youth leader said the federal government should focus its efforts on addressing insecurity, rather than “intimidating” him.

“Nigerians and the international community should beware that desperate efforts are being made to force those arrested to make implicating confession statements. I advise the DSS to desist from their unprofessional acts and devote such energy to eradicating insecurity,” he said.

“Nigerians and the international community should please note that I am a law-abiding citizen without blemish. I advise President Buhari to, in the interest of Nigerians that voted him to power, order his henchmen to desist from using falsehood and unholy tactics to soil my name. Such energy should be devoted to taming the herdsmen and bandits freely committing heinous crimes across Nigeria with impunity because their kinsman is in power.

“Yoruba people would not be demanding for a nation if government had lived up to its responsibilities. Self-determination is not a crime and all efforts to silence us and acquire our ancestral land for local and foreign criminal herdsmen will fail.

“Many Ken Saro-Wiwa arose after Nigerian government unjustly executed the non-violent activist. Those that emerged after him confronted government and almost brought Nigeria to its knees. I am another Saro-Wiwa.