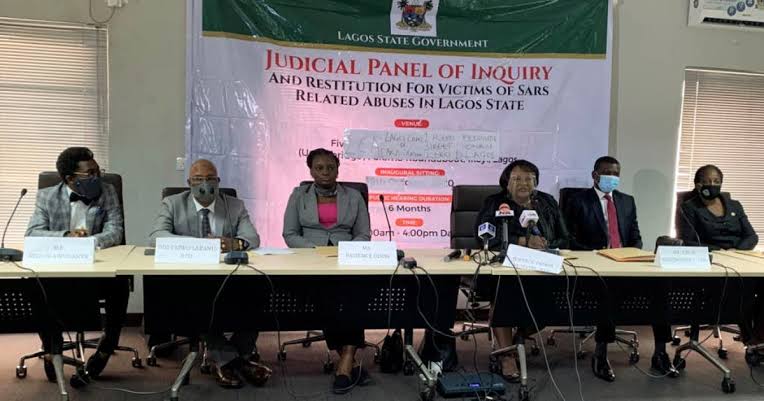 The Nigerian Army has told the Judicial Panel of Inquiry set up by the Lagos State Government that its soldiers did not use live bullets but fired blank ammunitions at the #EndSARS protesters at the Lekki Tollgate in Lagos.

Despite reports of some deaths and injuries sustained by some of the protesters, the army insisted that no one was shot dead as soldiers only fired blank ammunition at the protesters.

The Commander, 9 Brigade, Nigerian Army, Musa Etsu-Ndagi, said he was informed about the shooting by the Lagos State Governor, Babajide Sanwo-Olu, around 7.23 p.m. on October 20.

The army officer said the governor informed him that a certain “Lt Col Bello, the Commanding Officer, 65 Battalion, Bonny Camp, Victoria Island” was reportedly shooting at #EndSARS protesters at the Lekki Tollgate.

Etsu-Ndagi, a Brigadier General, one of the four army witnesses, said Mr Bello told him that he only fired blank ammunition into the air.

Bello told the army authority that “the protesters were happy to see the soldiers at the tollgate,” adding that he personally offered the protesters water and drinks while persuading them to go home and observe the 24-hour curfew declared by the Lagos State Government.

“On getting to the tollgate, I persuaded the crowd to go home and observe the 24-hours curfew declared by the state government. But surprisingly, the hoodlums continued throwing stones, bottles, and other dangerous objects at us and were burning tyres. I again fired some blank ammunition upward to scare the hoodlums away. But some protesters who were still at the tollgate sitting down quietly were given water and drinks by me while pleading with them to go home.”

“We did not fire at the protesters. Blank ammunition were fired upward to scare the hoodlums from the crowd. Nobody was shot dead at the Lekki tollgate, there was no massacre as claimed. The claim that the military took away dead bodies was not true. The protesters were happy to see us as indicated in some of the video clips of 20th October 2020,” he said.

Another army witness, Francis Omata, a brigadier, said the protest had turned from peaceful to violent by the time they arrived at the tollgate.

“On arrival at the tollgate at about 7.30pm, I met a rowdy situation. I also met the Commanding Officer, 65 Battalion (Bello), who briefed me on the situation. He briefed me that he met a hostile crowd, hoodlums mixed with the protesters, who were chanting and throwing stones at them. I was able to disperse the crowd by firing blank ammunition into the air.

“At this point, stones and sticks were being thrown at us. Then I moved to a safe area and briefed General Officer Commanding 81 Division, Maj Gen Godwin Ahamefuna Umelo by phone.

“The General Officer Commanding directed me to pacify the hostile crowd and move the troops back to base. However, the crowd still continued chanting #EndSARS. I then instructed the troops to withdraw to base,” Mr Omata said.