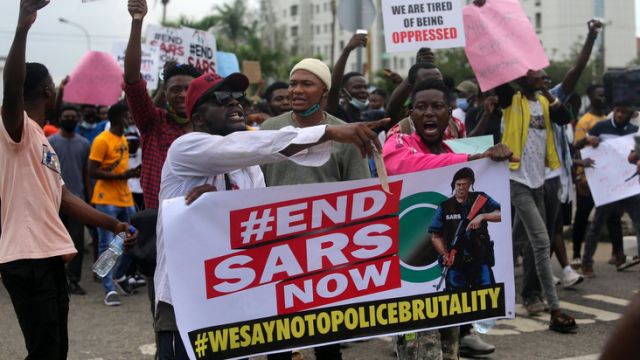 Hundreds of young anti-SARS protesters on Sunday stormed the Nigeria House in New York, insisting that indicted SARS operatives should be sacked, instead of being redeployed as announced by the Inspector General of Police, Muhammed Adamu.

Adamu also announced plans for a new policing model that would address the gaps in the just disbanded unit and also the constitution of an investigative team to probe the alleged cases of rights violations, among others.

But the protesters, who displayed placards with different inscriptions including, “We no want audio ban”, said IGP Adamu just scratched the surface of the issues at stake.

They argued that previous commitments announced by the force to change the behaviour of SARS operatives and other personnel had no effect.

Among them was Stephen “Papi” Ojo, the artist, model, and choreographer who stole the show as the ‘blue-guy’ in Beyoncé’s “Already” music video.

“We are not buying that because they told us in 2017 that SARS had been banned from a lot of things, but they continued,” said Miss Omobolanle Adams, one of the protest organisers.

“We want President Muhammadu Buhari to speak directly to us. We want justice for people that were murdered, raped, and assaulted.

“We want the SARS operatives responsible brought to book and at the end of the day, we don’t want them redeployed to other units. We want them gone,” she said.

In a series of tweets on Friday, the president assured Nigerians of his determination to end police brutality and bring “erring personnel to justice”.

Buhari said his administration’s “determination to reform the police should never be in doubt”, and sued for calm.

He blamed the bad reputation of SARS on some bad apples, noting that most police officers were committed to protecting Nigerians.