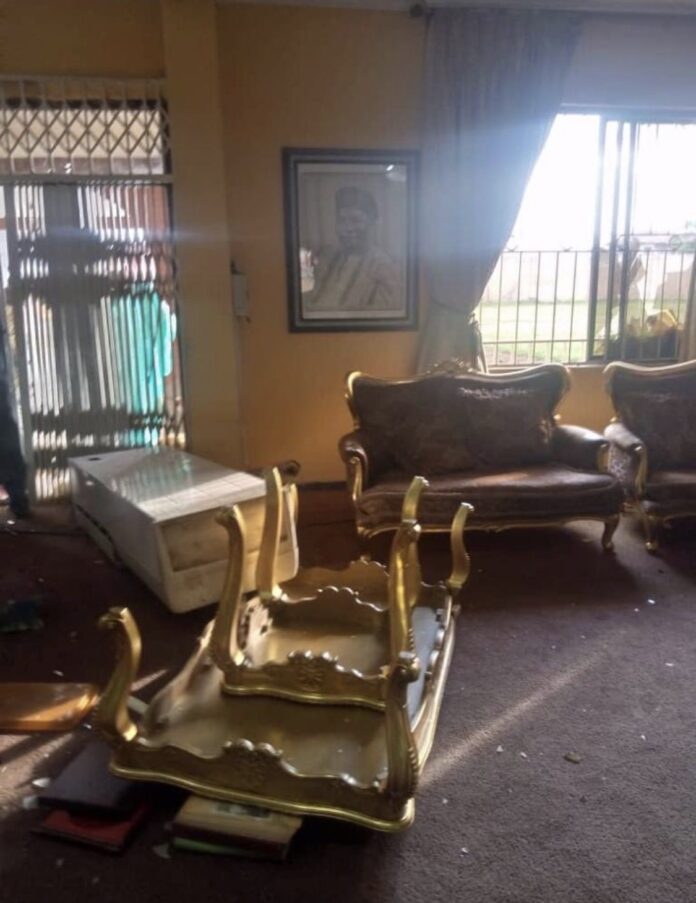 The Soun of Ogbomoso, Oba Oladunni Oyewumi and the Minister of Youth Development, Sunday Dare escaped death by the whiskers as youths, believed to be members of the #EndSARS campaign group attacked the palace of the revered monarch on Sunday.

The incident happened while Minister Dare was in a stakeholders’ meeting with the monarch and some of his chiefs.

The Soun and the minister were literally bundled out to safety by the combined team of DSS and police operatives.

The sitting room of the monarch and several vehicles in the palace were destroyed.

They also broke glasses and other valuables in the palace.

The secretary to the Oba, Toyin Ajamu confirmed the attack in a statement.

He said: “We had been trying to appease the protesters since morning. The protesters, who introduced themselves as students, came to the palace on Saturday and we addressed them. We learned that one person died in the process.

“Today, some of the aggrieved youths set up bonfires at the various junctions leading to the police station. To prevent the matter from degenerating, Kabiyesi directed some of his chiefs to appease the protesters but they started stoning whoever came their way and threw tyres into the station.”

“The Minister of Sports, Sunday Dare visited the palace shortly before the attack on the palace while returning from the visit to the family of the deceased.

“They shattered windscreens of vehicles in the palace, vandalised the palace and burnt down a motorcycle.

“We were only saved because there were burglar proofs on the windows. Nobody was injured but about 10 vehicles were vandalised, including the vehicle of Chairman, Christian Association of Nigeria, Ogbomoso North Zone Rev. Tayo Adeyanju.

“The police were running for dear lives so they couldn’t respond on time.

The minister also corroborated the story by the palace.

In a series of tweets from his verified handle, the minister wrote:

“Soun, myself, and council chiefs were scurried into safety by the police and Department of State Services.

“The hoodlums broke into the palace and destroyed chairs, overturned tables, broke windows. These were not youth or students. These were miscreants and thugs who saw a window of opportunity in the protest which (has) since abated. Thankfully, Soun, the chiefs, leaders of Parapo are safe.”

Wondering why the Soun’s palace was attacked, Dare stated peace had been restored.

According to him: “Ogbomoso youths are law-abiding. But hoodlums have taken over. A combined team of operation Burst from Ibadan and a unit from Ilorin are now on ground in Ogbomoso to help keep the peace, protect the peaceful and innocent and also stop criminal elements. Soun of Ogbomosho yesterday and today personally appealed to this group to stop the violence.”