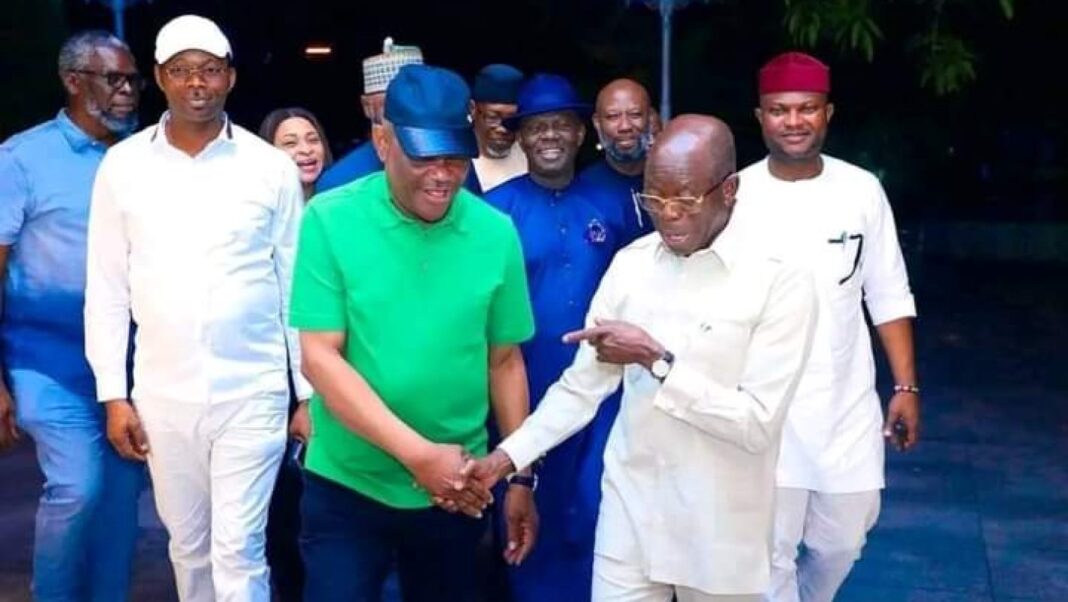 “I use this opportunity to apologise to you. I came to Edo State to make sure your candidate didn’t win election. I said you won’t win and you didn’t win. That assignment has been done and we now know who is who” – Wike

Rivers State Governor, Nyesom Wike apologised to the former governor of Edo State, Adams Oshiomhole, over his role in the re-election of Governor Godwin Obaseki in September 2020.

Wike tendered the apology to Oshiomhole at the inauguration of the Rumuepirikom Flyover in the Obio-Akpor Local Government Area of the state.

The former National Chairman of the All Progressives Congress (APC), was in the state to commission the project.

Wike said “I use this opportunity to apologise to you. I came to Edo State to make sure your candidate didn’t win election. I said you won’t win and you didn’t win. That assignment has been done and we now know who is who.

“We are now friends, let bygones be bygones. I want to sincerely apologise to you.”

Wike said he has suddenly become an enemy to other leaders in his party, the Peoples Democratic Party (PDP) for opposing their decision on the fate of the national chairman, Sen. Iyorchia Ayu.

“Each time you learn. People will praise you when you do for them. When you say, they are wrong, they begin to say all sorts of things.

“I’m sure those of them in my party before cannot do anything without Wike but because I said let the right thing be done, let agreement be agreement, I have now become an enemy. These are people who are praising me morning and night.”

The Rivers governor said that he stands on equity, fairness and justice.

Oshiuomhole remarked that the political divide does not mean war, adding that actions and exchanges of political leaders have a way of communicating that to the people.

“I listened to you attentively and you said Peter Obi is coming tomorrow. I want to congratulate you for that because I also invited Peter Obi when I was governor and those executive exchanges have a way of communicating to our people that political divide is not war,” Oshiuomhole stated.

“I also invited governors from other states to Edo the last one week before my tenure as you said, for them to see what I was able to do.

“I promise that when I get back to Abuja, I go take my mouth talk am wetin my mouth see (sic). The flyover I saw is not a culvert. There are people who commissioned culverts and said they were flyovers but what I see here is a beautiful flyover which you will see anywhere in the world,” Oshiomole added.

“We are now friends, let bygones be bygones,” Wike told a smiling Oshiomhole.

Oshiomhole, was Edo governor between 2008 and 2016, and handed over to Obaseki who was then a member of the APC.

He and Wike, however, fell apart due to intra-party squabbles and Obaseki couldn’t secure APC ticket to return to office in 2020 gotten by Osagie Ize-Iyamu.

Obaseki moved to the Peoples Democratic Party (PDP) and joined forces with Wike as seen by his many visits to the Rivers strongman’s residence during the crisis preceding the Edo State Governorship Election in 2020.

The Edo governor subsequently got the PDP’s governorship ticket and defeated Ize-Iyamu who was backed by Oshiomhole and other APC stalwarts including former Lagos State governor, Bola Tinubu and President Muhammadu Buhari.