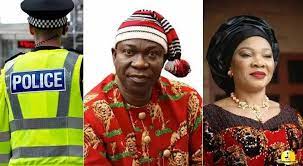 “We therefore reiterate that the EFCC’s move is malicious, immoral, ill-timed, political in appearance, and a typical case of a country throwing her citizen under the bus”.

A rights advocacy group, Human Rights Writers Association of Nigeria (HURIWA), has decried the order, describing it as malicious, immoral, ill-timed and political in appearance.

The interim forfeiture order includes 10 properties in Enugu, three in the United States of America (USA), two in the United Kingdom (UK), one in Lagos, nine in Dubai, and 15 located in the federal capital territory.

The judge ordered the anti-graft commission to publish the interim forfeiture order in a national daily within seven days from the date the order was given.

Members of the public interested in the properties are advised to approach the court within 14 days of the newspaper publication and show cause why the properties should not be permanently forfeited to the federal government.

The case has been adjourned till December 5.

Civil Rights Advocacy group, Human Rights Writers Association of Nigeria (HURIWA), yesterday took a swipe at the Economic and Financial Crimes Commission, (EFCC) over its action that has  culminated in an interim assets forfeiture order by a Federal High Court in Abuja against former Deputy President of the Senate, Ike Ekweremadu.

In a statement yesterday by HURIWA group Coordinator, Emmanuel Onwubiko, he noted that  asset forfeiture lawsuit coming at a time Ekweremadu was in custody, facing trial in the United Kingdom, and unable to defend himself or properly brief his lawyers was malicious, immoral, in bad faith, and tantamount to a country throwing her citizen under the bus.

HURIWA while decrying what it  viewed as concerted effort between the anti-graft agency and the London Metropolitan Police to botch Ekweremadu bail and keep him perpetually in detention, said, “We are in shock over the news of the interim assets forfeiture order against Senator Ike Ekweremadu following an application by the EFCC.

“We are particularly shocked because it is coming at a time the Senator is fighting for his freedom, reputation, and the life of his daughter in a foreign land.

“We equally recall that the petition against Senator Ekweremadu, which he claimed was politically motivated, was lodged against him at the EFCC in 2016, but the Senator’s first brush with the anti-graft agency only came in the early hours of July 24, 2018, when operatives of the agency and a retinue of security agents laid siege to his Apo Legislative Quarters official residence without any previous invitation.

“It is instructive that security agencies also laid siege to the Maitama residence of the President of the Senate at the time, Dr. Bukola Saraki, in a simultaneous move that HURIWA and other civil society organisations rightly described as an attempt to muscle the legislature by preventing both presiding officers from plenary in order to remove them illegally from office. However, Saraki’s sudden appearance at the National Assembly botched their plan.

“We therefore find it discomfiting that although Ekweremadu was in Nigeria for the past six years, the EFCC suddenly found it auspicious to file assets forfeiture suits against him in July 2022 following the agency’s July 18, 2022 written assurances to the London Metropolitan Police ahead of the Senator’s bail hearing in July. That letter was tendered by the Metropolitan Police to scuttle Ekweremadu’s bail application.

“It is also instructive that this interim asset forfeiture order is again coming a few days to the pre-trial hearing on the Senator’s alleged organ harvest case in the UK rescheduled for Monday, November 7, 2022, and during which the Senator could reapply for bail.

“It is clearer why the court hearing was rescheduled from October 31 to November 7, 2022 after which the indefensible order must have been granted exparte against a man in detention contrary to cardinal principle in law that both sides should be heard.

“This development, coupled with the fact that Ekweremadu’s real trial would only begin in May 2023, leaves HURIWA with no other choice than to suspect that there is a collaborative effort between EFCC, Metropolitan Police, and UK prosecutors to scuttle Ekweremadu’s bail prospects, once again, and keep him perpetually in detention over a clearly bailable offence.

“Besides, HURIWA is also aware that the Senator had earlier won the two asset-related lawsuits between him and the Special Presidential Investigation Panel on the Recovery of Public Property (SPIP)”.

“We therefore reiterate that the EFCC’s move is malicious, immoral, ill-timed, political in appearance, and a typical case of a country throwing her citizen under the bus.

“If a country cannot help its citizen get a fair trial, why inject itself into his matter and add to his woes as the EFCC has done