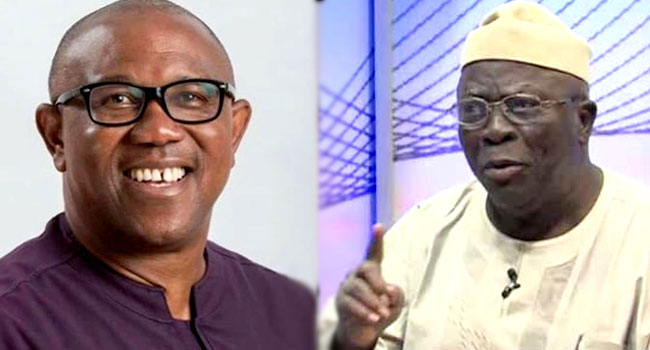 The All Progressives Congress (APC) presidential campaign council on Saturday said the purported endorsement of Peter Obi, the presidential candidate of the Labour Party by Afenifere chieftain, Pa Ayo Adebanjo is strictly a personal decision.

Reacting in a statement on Saturday, Bayo Onanuga, APC campaign director of media and publicity, said Adebanjo does not speak for Afenifere.

Onanuga said although Adebanjo is free to support whomever he likes, he cannot turn the Yoruba group into a personal franchise.

“Papa Ayo Adebanjo does not speak for Afenifere. He is free as an individual to support anyone he likes, in furtherance of his democratic right,” he said.

“We know for a fact that Baba has turned Afenifere into his personal estate as Acting Leader. We are also certain that there was nowhere Afenifere, as we know it, met and took a decision to adopt Mr. Peter Obi as a candidate for the 2023 presidential election.

“We respect the age of Baba Adebanjo but he can not turn Afenifere into his personal franchise for any political alliance.

“We are very much aware that Baba Reuben Fasoranti, the real leader of Afenifere had stated clearly that Pa Adebanjo has always been speaking for himself on many national issues using the name of the group.

“It is our well-considered position that Pa Adebanjo cannot appropriate Afenifere. Baba is just an individual who is free to support any politician of his choice. As an individual, he cannot equate himself with the socio-cultural and socio-political organisation.”

Adebanjo had, in July this year said only the LP candidate can govern independently “without the influence of these criminals in the government”.