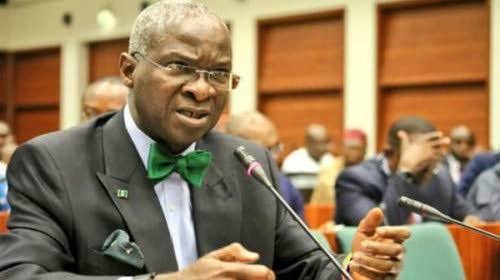 Minister of works and housing, Babatunde Fashola has condemned the obstruction of vehicular movement along the Lagos-Ibadan expressway by protesting university students under the aegis of National Association of Nigerian Students, NANS.

Fashola, who spoke on Wednesday while briefing journalists after the federal executive council meeting in Abuja, said the actions of the protesting students was illegal.

ASUU has been on strike since February 14 over its demand for improved funding for universities, review of salaries of lecturers, among other issues.

The students occupied the Lagos-Ibadan expressway in a protest that later resulted in gridlock.

Speaking on the development, the minister said the Nigerian constitution recognises citizens’ right to public protests, but does not empower any Nigerian to “inflict pain and inconvenience on other people”.

“Once again, I apologise and empathise with commuters who need that place to get on with their lives. It’s the place we left to the last really, because it’s the most built-up area — the last six kilometres into Lagos, very densely populated and occupied. There’s very little room for alternative routes for people. So, you just have to bear with us,” he said.

“I also heard that some aggrieved students under the aegis of NANS are going to the road to protest. My respectful view is that it is not helpful at all to the citizens.

“The right to protest is a very well-protected right in our constitution, but it does not include the right to inflict pain and inconvenience on other people.

“And so, whilst the protests can go on, they should refrain from blocking the road in order to do their protests. That in itself is a violation of law.”