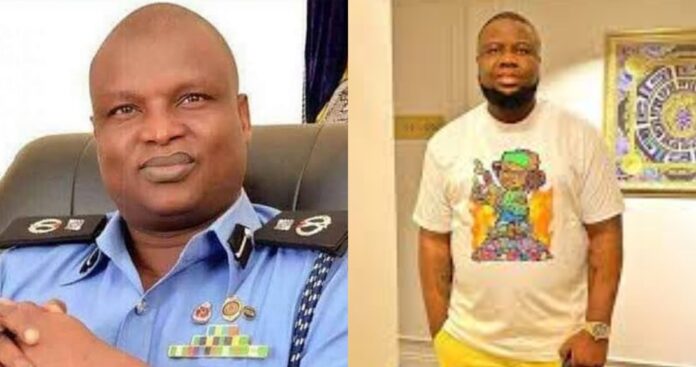 The move to extradite Abba Kyari, suspended Head of the Intelligence Response Team (IRT), a unit of the Nigerian Police Force (NPF) under the direct responsibility of the Inspector General of Police (IGP), to the US to face drug charges, may have come to an abrupt end.

This is because the Nigerian government has exonerated him of any link in the $1.1million, said to have been committed by internet scam kingpin, Ramon Abbas, popularly known as Hushpuppi, who has already been convicted for the offence by a US court and is awaiting sentencing.

The Nation reports that the office of the Attorney General, which had earlier filed an extradition case against the officer, based on a prima facae case, has now issued new legal advice exonerating him from money laundering allegations.

The office of the AGF which in its first legal advice admitted that a prima- facie case of money laundering of 33 payments (proceeds of crime) was established by the DIG Joseph Egbunike led Special Investigation Panel against Kyari has now said there are no links with Kyari following further investigations.

Incidentally, the same Kyari and other defendants are currently being prosecuted for drugs and money laundering allegations at the Federal High Court Abuja in the charge marked FHC/ABJ/57/2022, where they made their first appearance, last week.

The new legal advice with reference number, DPPA/LA/814/21, written on behalf of the AGF by the Director of Public Prosecutions, Ministry of Justice, Mohammed Abubakar emphasised that the evidence contained in the case diary had no link between DCP Abba Kyari and Hushpuppi.

It said the evidence contained in the case diary ‘was not sufficient to indicate or show that the said monies (N279million) were laundered directly or indirectly by Kyari to disguise their origin’ adding that ‘the police report on the investigation failed to probe the gaps identified in their investigation by the AGF office’.

The advise titled ‘Re: Forwarding of the investigation report of the Nigeria Police Force Special Investigation Team and request for legal advice with regards to allegations of criminal conspiracy, aiding and abetting Internet fraud, wire fraud, identity theft and money laundering against DCP Abba Kyari’ was addressed to IGP Usman Alkali Baba.

“It is our view that the above response has not linked the suspect, DCP Abba Kyari, to the offence of money laundering as the evidence contained in the case diary is not sufficient to indicate or show that the said monies were laundered directly or indirectly by Kyari to disguise their origin, more so that the aforementioned recipients or receivers exonerated him in their statements as having nothing to do with the monies.”

Consequently, the AGF office advised the IGP and Police management to explore their internal Force Disciplinary organs against Kyari through the Police Service Commission (PSC) which is constitutionally empowered to carry out disciplinary functions for breaching the code of conduct for law enforcement officers by hobnobbing with suspected fraudsters and people of questionable means in his capacity as a senior officer and head of the IRT.

In the new advice, the AGF Officer added that DCP Kyari was also liable to be sanctioned for violating the social media policy of the police by responding to the Federal Bureau of Investigation’s indictment on Facebook; breaching the Police Code of Professional Ethics by acting on complaints unilaterally without recourse to established protocol and detaining a suspect, Vincent Chibuzor, for over a month without a valid court order and regards to his fundamental human rights.

Recall that following the rejection of the initial SIP report submitted by the Police headquarters to the Police Service Commission based on the legal advice of the AGF office, the Force headquarters was directed to carry out a new investigation and submit its new findings on February 25 but this was not done.