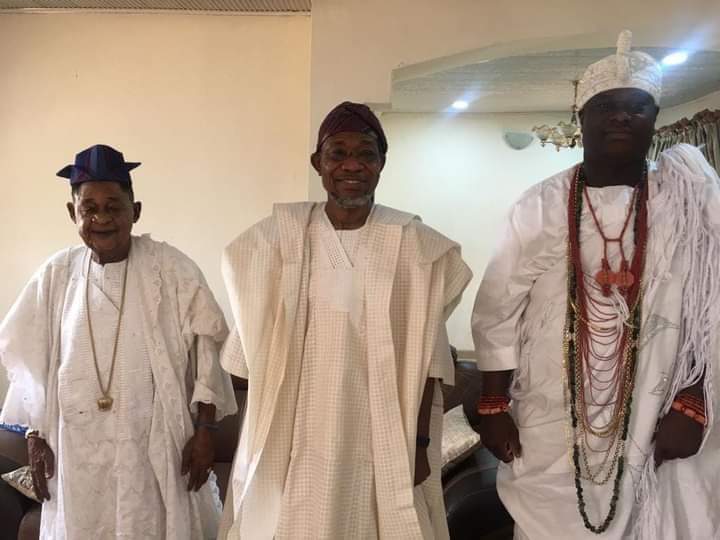 The rift between the Minister of Interior and former governor of Osun State, Rauf Aregbesola and his political godfather, Asiwaju Bola Ahmed Tinubu, was the sole topic of discussion today when two prominent Yoruba monarchs, the Ooni of Ife, Oba Adeyeye Ogunwusi and the Alaafin of Oyo, Oba Lamidi Adeyemi met with the minister at the private of the Alaafin in Ibadan.

The objective of the meeting, according to the sources close to the Alaafin’s palace was to reconcile the two political comrades.

The move by the traditional rulers is the latest of series of efforts by prominent Yoruba leaders to broker peace between Aregbesola and Tinubu.Advertisements

Rift between the duo became noticeable in May 2020, when Aregbesola revamped the Mandate Group, a core of Tinubu’s loyalists, and usurped the closely-knitted caucus for individuals he could trust.

The Minister sanctioned the relaunch without Tinubu’s approval, naming Abdullahi Enilolobo, his protege from Alimosho LGA, as the new leader, while he remained the grand patron of the group.

A subsequent communique signed by 27 party chieftains, who are members of the Governor’s Advisory Council (GAC), had disbanded and prohibited all factions like Justice Group and Mandate Group.

The rift was said to have been worsened by Oyetola’s actions as the governor of Osun.

Although Oyetola served as chief of staff to Aregbesola during his tenure as Osun governor, he is related to Tinubu and more loyal to the former Lagos state governor.

Upon assuming office, Oyetola reversed some of the decisions taken during the Aregbesola administration, which apparently infuriated the minister.

Aregbesola backed Alhaji Moshood Adeoti, former secretary to the state government against Oyetola, Tinubu’s cousin, for the APC governorship ticket, and had berated the former Lagos governor for not supporting his bid to stop Oyetola the way Akinwunmi Ambode, immediate past governor of Lagos, was stopped from securing second term ticket in 2019.

The minister had said Tinubu was exalted “beyond his status, and he turned himself to a god over us.”

Aregbesola had added that Oyetola would be ousted from office for failing to stick to the plan that would make Osun prosperous.

But Oyetola eventually floored his candidate, Adeoti who came a distant second with 12,921 votes as the governor polled 222,169 to emerge as the APC flagbearer for the July 16 governorship election.

Following the defeat, Aregbesola is said to have backed down and is currently making effort to reconcile with Tinubu.

Yesterday, a group that identified itself as Friends of Aregbesola sponsored a full page advertorial in The Nation Newspaper, apologizing to Tinubu over the minister’s scathing verbal attack on him in the lead up to the APC governorship primary election in the state fortnight ago.

It is understood that in the wake of Aregbesola’s peace overtures, both politicians have agreed to sheathe their swords and work together ahead of the Osun State governorship election and the 2023 presidential poll.

Tinubu has since expressed his interest in contesting for president in 2023 and has been campaigning for the APC presidential ticket.