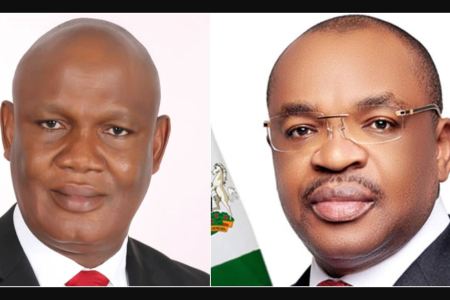 Governor Udom Emmanuel of Akwa Ibom has sacked his Chief of Staff, Mr Ephraim Inyang-Eyen in what analysts described as a fall out of the disagreement between the governor and his bosom friend over who takes the rein of power in 2023.

A source told Fedredsnews that Ephraim was backing Senator Bassey Albert for the governorship ticket of the Peoples Democratic Party (PDP).

The sack letter reads: “On behalf of His Excellency, the Governor, government and the good people of Akwa Ibom State, I write to convey to you, the Governor’s profound appreciation of the worthy contributions you made to the development of our dear state while you served as Chief of Staff to the Governor.

“However, given the urgent need to match skill set and competencies to the task of maintaining the momentum of economic development in peace, your services are no longer required and you are hereby relieved of your position, as Chief of Staff (CoS) to His Excellency, the Governor with immediate effect.

“You are therefore directed to handover all property of government in your possession, to the Secretary to State Government.

“Please, accept the assurances of His Excellency, the Governor’s goodwill and highest regards as you proceed to other endeavours.”