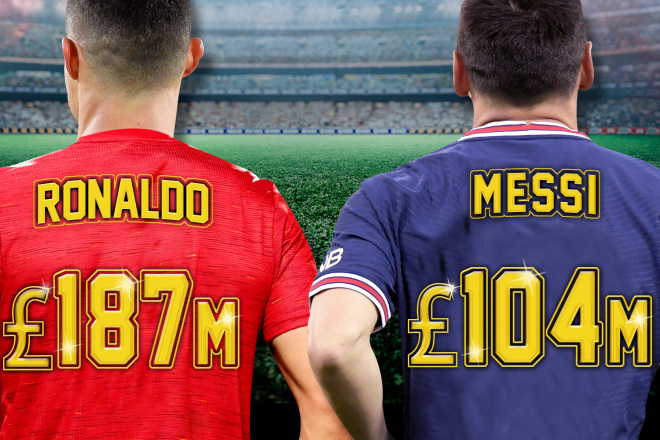 The two players were involved in the most sensational transfers of the summer.

Messi left Barcelona on a free to join Paris Saint-Germain while Ronaldo ‘returned home’ to Manchester United from Juventus for just £12m.

Unsurprisingly for both multiple Ballon d’Or winners, shirt sales have gone through the roof.

Ronaldo, who is set to make his second United debut against Newcastle on Saturday, has the fastest-selling jersey in Premier League history.

And according to LoveTheSales, Ronaldo is WELL ahead of his old rival Messi.

The result is that United have already made more off the back of this than they shelled out for the player.

Stuart McClure, the co-founder of shopping marketplace LovetheSales.com, said: “We are tracking record-breaking sales of ‘Ronaldo 7’ kits across online retailers, to the point where demand is now outweighing supply.

“Online searches for the ‘Ronaldo 7’ shirt have increased by over 600 per cent, compared to last summer.

“This is proving to be the signing of the summer for Manchester United. “

Not long after rejoining United, it was announced that Edinson Cavani had agreed to give up the No7 shirt to Ronaldo.

In just four hours following the announcement United’s online store surpassed the highest day of sales ever on a single sports merchandise site outside of North America.

The club’s online shop is run by Fanatics, who work with more than 300 clubs around the world and top sports leagues.

The first hour of sales alone surpassed the best ever full day of global sales for United Direct, the official club merchandise site.

Across the Fanatics network, Ronaldo became the biggest selling player ever in the 24 hours following a transfer to a new club.