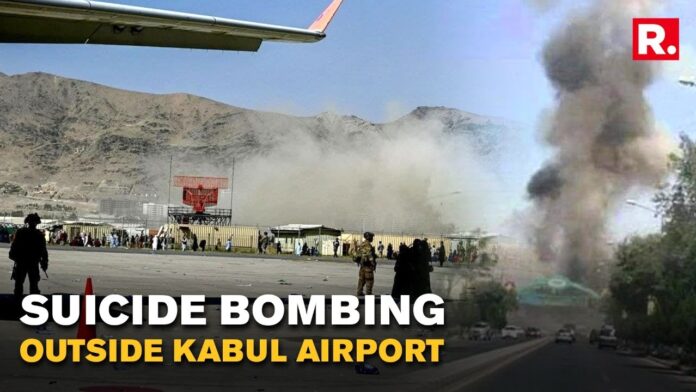 Twin suicide attacks at the gate of Kabul airport on Thursday killed no fewer than 60 civilians and 12 U.S. troops,

The terror group ISIS-K have claimed responsibility for the deadly double attack, the group’s Amaq News Agency said on its Telegram channel.

Kabul health officials were quoted as saying 60 civilians were killed. Video shot by Afghan journalists showed dozens of bodies strewn around a canal on the edge of the airport. At least two blasts rocked the area, witnesses said.

Islamic State said one of its suicide bombers targeted “translators and collaborators with the American army”. U.S. officials also blamed the group.

It was believed to be the most U.S. troops killed in Afghanistan in a single incident since 30 U.S. personnel died when a helicopter was shot down in August 2011.

US President Joe Biden has vowed the United States will hunt down the attackers of the twin explosions, adding that he has directed the Pentagon to develop plans to strike back at Islamist militants.

In an emotion-laden voice, the president said, “These American service members who gave their lives, it’s an overused word but it’s totally appropriate here, were heroes; heroes who have been engaged in a dangerous selfless mission to save the lives of others

“They are a part of an airlift and evacuation effort unlike any seen in history with more than 100,000 American citizens, American partners, Afghans who helped us and others taken to safety in the last 11 days.”

“We will not be deterred by terrorists … We will continue the mission,” Biden said.

The Taliban, however, downplayed the attack.

Its spokesperson Zabihullah Mujahid, tweeted, “Today late in the evening, sound of explosions were heard inside the Kabul Airport. The explosions were carried out by the American forces to destroy their equipment. Kabul residents should not be worried.”

Reports from international media claim corpses lay in the canal by the airport fence, video from the scene showed, some being fished out and laid in heaps while wailing civilians searched for loved ones.

An eyewitness told CNN, “For a moment I thought my eardrums were blasted and I lost my sense of hearing. I saw bodies and body parts flying in the air like a tornado blowing plastic bags. I saw bodies, body parts elders and injured men, women and children scattered,” said one Afghan who had been trying to reach the airport. “That little water flowing in the sewage canal had turned into blood.”

General Frank McKenzie, head of U.S. Central Command, said the United States would press on with evacuations, noting that there were still around 1,000 U.S. citizens in Afghanistan. But several Western countries said the mass airlift of civilians was coming to an end, likely to leave no way out for tens of thousands of Afghans who worked for the West through two decades of war.

Violence by Islamic State is a challenge for the Taliban, who have promised Afghans they will bring peace to the country they swiftly conquered. A Taliban spokesman described the attack as the work of “evil circles” who would be suppressed once foreign troops leave.

Additional reports from CNN and Reuters