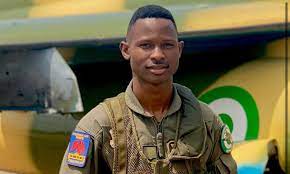 President Muhammadu Buhari on Tuesday hailed the gallantry of Flt. Lt. Abayomi Dairo, the Nigerian Air force pilot who came under severe attack by bandits shortly after a successful air interdiction mission between the boundaries of Zamfara and Kaduna states.

Buhari’s spokesman, Malam Garba Shehu, in a statement on Tuesday, said Buhari, who was briefed on the successful operation by the nation’s defence forces to rescue the pilot, was pained by the news of the air crash.

“I was shocked by the devastating news of the air crash but felt much relieved, following the successful ejection by the pilot and his eventual rescue.

“May the injured pilot recover at the earliest time,” the president was quoted as saying.

The Director of Public Relations and Information, NAF Headquarters, Air Commodore Edward Gabkwet, in a statement, said the gallant pilot ejected from the aircraft and found his way to the military base.

The pilot was said to have used the cover of darkness and his phone set for navigation, eluding several bandits’ strongholds as he manoeuvred his way to a Nigerian Army Unit where he was finally rescued.