Obama called Trump a ‘racist, sexist pig’ and ‘a f**king lunatic’ in shocking behind the scenes attack 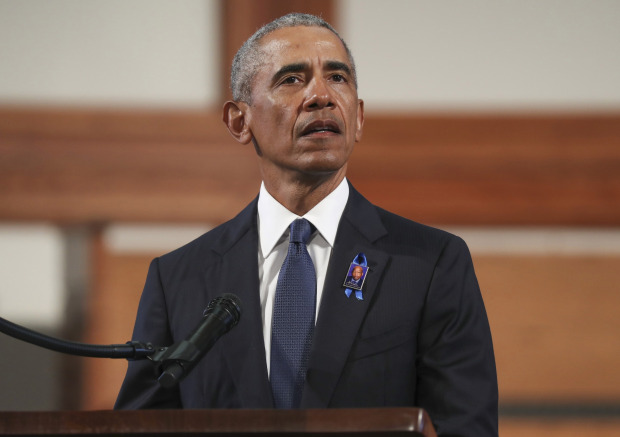 Former US President, Barack Obama reportedly called Donald Trump “a racist, sexist pig” and “a f**king lunatic” in a shocking behind the scenes attack.

The insults were revealed in a bombshell new tell-all novel, Battle for the Soul: Inside the Democrats’ Campaigns to Defeat Donald Trump by Edward-Isaac Dovere, read by The Guardian.

Obama reportedly preferred the prospect of Donald Trump becoming the 45th president, as opposed to Texas Senator, Tez Cruz but this swiftly changed, according to Dovere.

From 2017, Obama reportedly dubbed Trump “a madman,” before the insults got darker.

Dovere reported that “more often,” Obama would say “I didn’t think it would be this bad,” or “I didn’t think we’d have a racist, sexist pig,” and even going as far as slamming him as a “f**king lunatic.”

However, Dovere reported that Obama’s strongest criticism was prompted by reports that Trump was speaking to foreign leaders, including Vladimir Putin, without any of his aides on the call.

The book also makes shocking claims about the current Biden administration – including that Kamala Harris “keeps a list of enemy journalists and other politicians who don’t fully understand her.”

Both the vice president and President Joe Biden have been criticized for the lack of access reporters have been given to question them, particularly after Harris was tapped to lead on the border crisis.

Yet Harris, 56, has still refused to take questions after events and allegedly keeps a list of words that she dislikes being described as by the press.

Her aides are warned to watch out for words such as cautious, careful, guarded, and hesitant.

According to a profile published in The Atlantic by the book’s author on Monday, Harris views reporters’ attempts to question her as an “act of impish aggression.”

The profile claimed that she keeps a note of those who she believes “don’t fully understand her or appreciate her life experience.”

Reportedly among them is Washington Post reporter, Chelsea James, who covered the 2020 election.

James, who generally works as a sports writer, is said to have gotten on the VP’s naughty list after she offended Harris with her description of her sorority’s trademark cheer, the “skee-wee.”

At an event for Harris’ book The Truth We Hold in 2019, James described the tradition as “screeches,” angering the VP.

The profile noted that Harris “retreats being talking points” when speaking in public and refuses interview requests.

It added that TV producers are second-guessing the money spent on sending reporters on trips with her as she comes across as “uninteresting” and produces “little usable material.”