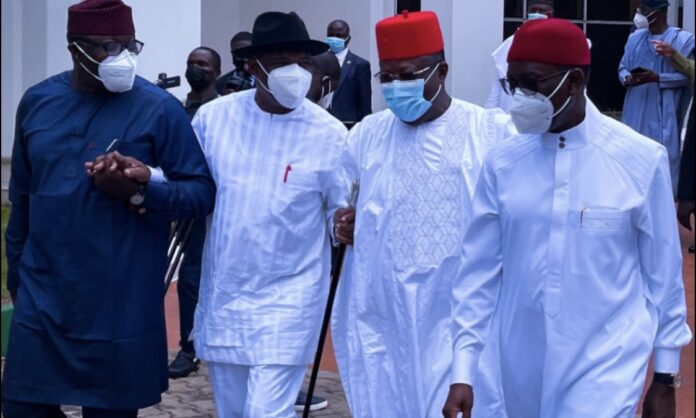 Governors from the seventeen southern Nigerian states, Tuesday, echoed the concerns of their people and called on President Muhammadu Buhari to convoke a national dialogue that would, once and for all, address thorny issues like revenue allocation formula, state police, lopsided appointments into Federal Government agencies, including security agencies, and general insecurity in the land.

The governors, however, ruled out secession, as the best option to solving Nigeria’s problems and therefore, restated their commitment to the unity of Nigeria.

The above were the crux of the communiqué issued at the end of their meeting in Asaba, Delta State.

The governors, amongst other things, also opposed open grazing

The communiqué signed by the 17 governors partly read in part, “At its meeting, held today, 11th May 2021, the Southern Governors Forum reviewed the situation in the nation generally and focused on the current security situation, agitations/restructuring, prospect for inter-state collaboration and partnerships as well as on the incidence of the COVID-19 pandemic. Rising from the meeting, the Forum:

“Affirmed that the peoples of Southern Nigeria remain committed to the unity of Nigeria on the basis of justice, fairness, equity and oneness and peaceful co-existence between and among its peoples with a focus on the attainment of shared goals for economíc development and prosperity;

“Agreed that the progress of the nation requires that urgent and bold steps be taken to restructure the Nigerian Federation leading to the evolution of state police, review of revenue allocation formula in favour of the sub-national governments and creation of other institutions which legitimately advance our commitment to and practice of true federalism;

“Recommended that in view of widespread agitations among our various peoples for greater inclusiveness in existing governance arrangements, the Federal Government should convoke a national dialogue as a matter of urgency;

“Recommended that in deference to the sensitivities of our various peoples, there is need to review appointments into Federal Government Agencies (including Security Agencies) to reflect federal character as Nigeria’s overall population is heterogenous.”