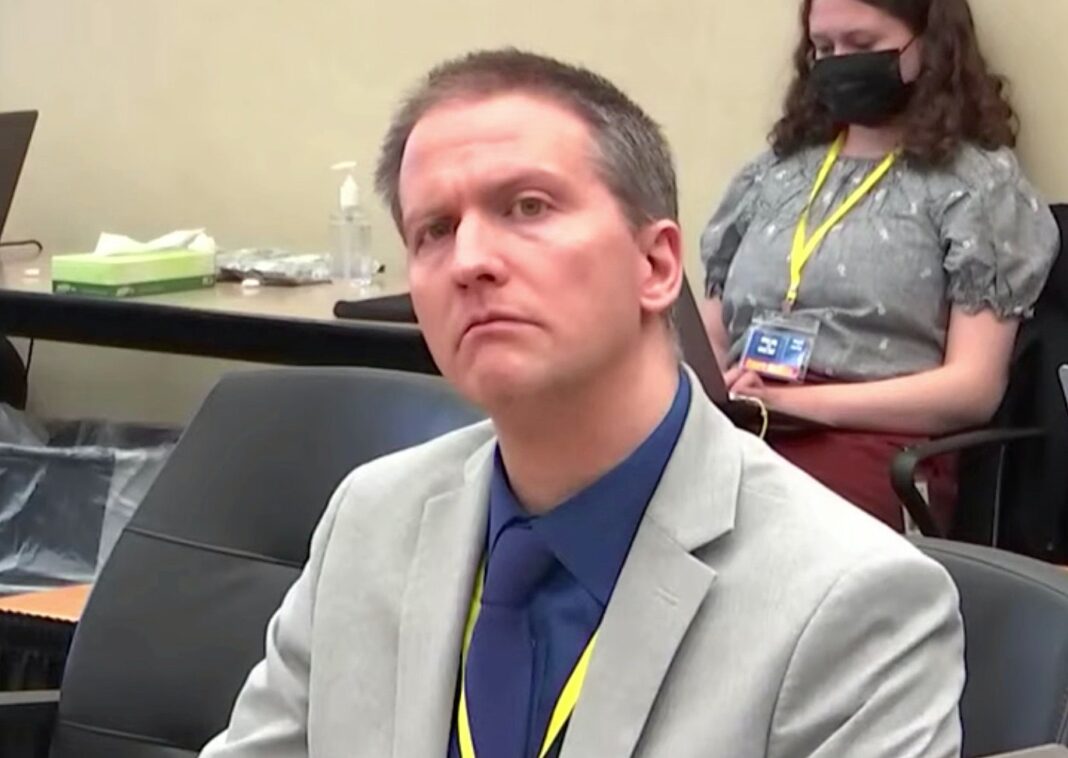 The 45-year-old former cop was found guilty of all counts by jurors at the Hennepin County Court just after 5pm on Tuesday, and now faces a maximum sentence of 75 years in jail.

The racially diverse jury – anonymous and sequestered from the outside world – deliberated for four hours on Monday and resumed deliberating this morning at 9am.

In total, jurors deliberated for around 10-and-a-half hours before reaching their verdict on Tuesday.

As each of the charges against Chauvin was separate, jurors had to reach a separate verdict for each count. They had to conclude Chauvin’s actions were a “substantial causal factor” in Floyd’s death and that his use of force was unreasonable.

Deliberations over Chauvin’s fate began on Monday afternoon after both the prosecution and defense made their closing arguments for conviction and acquittal, respectively, summing up the evidence.

During the three-week trial, prosecutors set out to prove that Chauvin acted recklessly when he knelt down on George Floyd’s neck for nine minutes and 29 seconds during an arrest on Memorial Day last year.

That neck restraint, prosecutors argued, was the direct cause of Floyd’s death and laid out evidence that he died from low levels of oxygen.

The defense, meanwhile, countered that Chauvin had acted within reason by restraining Floyd, who they claimed had been non-compliant and under the influence of drugs.

Led by attorney Eric Nelson, the defense argued that Floyd had in fact died from a heart attack brought on by a myriad of factors, including heart disease and drug use.

A total of 45 witnesses were called to the stand throughout the course of the trial – 38 for the state and seven for the defense – including the Minneapolis police chief and other officers who openly condemned Chauvin’s actions.

During closing arguments on Monday, prosecutor Steve Schleicher argued to the jury that Chauvin had violated his sworn police oath to protect and serve the community when he knelt down on Floyd’s neck.

Schleicher told jurors on Monday morning that policing is about “wearing your badge over your heart”, but said Chauvin’s “badge wasn’t in the right place” during Floyd’s arrest.

He then told the court that Chauvin had intent to harm Floyd, as he “had to know” the 46-year-old was in a state of medical distess.

“He did it on purpose. This was not an accident,” he said of Chauvin.

“He knew better, he just didn’t do better.”

Before concluding his final appeal to the jury, Schleicher urged the panel of seven women and five men to “believe” their eyes in his closing remarks, referencing the now-infamous video of Floyd’s final moments of life, which sparked outrage in May last year.

“What you have to find is that 9 minutes and 29 seconds, with knees on his neck and on his back, being held down, was a substantial factor in George Floyd’s death,” he said. “We know how George Floyd died.

“You can believe your eyes… It’s exactly what you knew. It’s what you felt in your gut. It’s what you now know in your heart. This wasn’t policing; this was murder. The defendant is guilty of all three counts. All of them. And there is no excuse.”

Schleicher also showed the jury a picture of some of the injuries sustained by Floyd during the arrest, as he squirmed and struggled under the knee of Chauvin, begging for his life.

One of the pictures shows a bruise and abrasions to the left side of Floyd’s face. Others show cuts to his knuckles and a bloody graze on his left shoulder.

He asked the jury to look at the images and ask themselves one question before delivering a verdict against Chauvin: If not for the cop’s restraint, would Floyd have died last May?

Schleicher further stressed that within just the first four minutes of the restraint, Floyd had complained he couldn’t breathe 27 times.

“The only thing about [the] defendant’s intent that we have to prove is that he applied force to George Floyd on purpose,” Schleicher said.

“Somebody’s telling you they can’t breathe, and you keep doing it. You’re doing it on purpose. … How can you justify the continued force on this man when he has no pulse.”

Dr. Martin Tobin, a renowned pulmonologist and perhaps the prosecutions strongest witness, told the court that Floyd was placed in a “vice” while being pinned to the street that left him “trying to breathe with his fingers and knuckles.”

He added that he was able to see signs of brain damage in Floyd after watching only five minutes and three seconds of the footage of his arrest.

Tobin, who has been a lung and critical care specialist for more than 45 years, claimed that Chauvin was kneeling on Floyd’s neck for up to 90 percent of that time.

He said that for 57 percent of that time, Chauvin’s other knee was on Floyd’s back.

Tobin told the jurors that Floyd died “from a low level of oxygen” that was caused by “shallow breathing.”

He answered no when asked whether Floyd died a sudden death.

“That’s the moment the life goes out of his body.

“He was taking shallow breaths that weren’t able to carry the air through his lungs, down to the essential areas in the lungs,” Tobin added.

Chauvin ‘should have stopped’

One of the most sensational pieces of testimony was delivered on the stand by Minneapolis Police Chief Medaria Arradondo, who openly condemned the actions of Chauvin during Floyd’s arrest.

Arradondo said Chauvin – who was fired from the department after Floyd’s death – failed to follow department use-of-force, de-escalation, and duty to render air policies.

“I absolutely agree that violates our policy,” Chief Arrandondo said when asked about Chauvin’s tactics by the prosecutor.

“That is not part of our policy; that is not what we teach,” he added.

He later added that Chauvin’s actions may have been acceptable during “the first few seconds” of his interaction with Floyd, but not after the man was subdued.

“Once Mr. Floyd had stopped resisting, and certainly once he was in distress and trying to verbalize that, that should have stopped,” Arradondo said.

‘Not an incident of deadly force’

Much of the defense’s case focused on the argument that Chauvin had acted reasonably when he restrained Floyd, who was often painted as non-compliant to police orders.

One of attorney Eric Nelson’s key witnesses to argue this point of view was former cop-turned-use-of-force expert, Barry Brodd.

Brodd compared the neck restraint used by Chauvin for nine minutes and 29 seconds to an officer firing a stun gun at a suspect who falls, hits their head, and then dies.

He testified that his review of the evidence led him to the opinion that the type of force Chauvin used on George Floyd was justified and that the former Minneapolis police officer “was acting with objective reasonableness following Minneapolis Police Department policy and current standards of law enforcement in his interactions with Mr. Floyd.”

Brodd’s testimony offered a drastic contrast from the dozens of witnesses who testified for the defense, concluding Floyd had died from low oxygen caused by Chauvin’s restraint.

On cross-examination, he also said that police were justified in pinning down Floyd because he kept resisting instead of “resting comfortably”.

“Resting comfortably on the pavement?” the prosecutor continued, to which Brodd responded, “Yes”.

During his closing arguments yesterday, defense attorney Eric Nelson stressed to the jury his belief that Chauvin acted just as any other reasonable officer would have done.

Nelson noted that officers who first went to the corner store where Floyd allegedly passed a counterfeit $20 bill were struggling with Floyd when Chauvin arrived as backup.

The defense attorney also pointed out that the first two officers on the scene were rookies and that police had been told that Floyd might be on drugs.

“A reasonable police officer understands the intensity of the struggle,” Nelson said, noting that Chauvin’s body camera and badge were knocked off his chest.

The defense attorney said the failure of the prosecution to acknowledge that medical problems or drugs played a role “defies medical science and it defies common sense and reason.”

‘His heart was too small’

Co-prosecutor Jerry Blackwell had the last word during closing arguments while rebutting Nelson’s marathon near-three-hour effort to persuade the jury to acquit Chauvin on all counts.

Blackwell noted how the defense referenced Floyd having a heart that was too big, which they say caused his death, and countered, “The reason George Floyd is dead is because Mr. Chauvin’s heart is too small.”

The co-prosecutor, who is black, added that the questions about the use of force and cause of death are “so simple that a child can understand it.”

“In fact, a child did understand it, when the 9-year-old girl said, ‘Get off of him,’” Blackwell said, referring to a young witness who objected to what she saw. “That’s how simple it was. `Get off of him.’ Common sense.”

Defense attorney Nelson also argued on Monday that angry bystanders gathered at the scene of George Floyd’s fatal arrest distracted the ex-cop at a “critical moment”.

“As this crowd grew more and more upset or deeper into crisis, a very critical thing happens at a very precise moment,” attorney Eric Nelson told jurors, claiming it was at this moment that Floyd took his last breath.

It was at this moment, Nelson said, that Chauvin pulled out a can of pepper spray into the crowd’s reactions. He also said Chauvin was “startled” by an off-duty firefighter who approached him from behind.

“All of these facts and circumstances simultaneously occur at a critical moment,” Nelson said. “And that changed Officer Chauvin’s perception of what was happening.”

Nelson added that, because Chauvin was aware he was being filmed, he couldn’t have possibly intended to kill Floyd.

He also added that earlier in the arrest, Chauvin rolled window inside a police cruiser and turned on air conditioning when Floyd said he couldn’t breathe.

“There is absolutely no evidence that officer Chauvin intentionally applied unlawful force.”