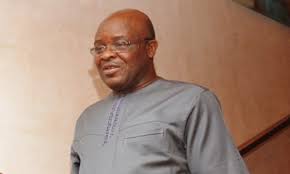 The Chairman of the National Caretaker Committee of the All Progressives Congress, (APC), Mai Mala Buni has hailed the decision of the former Chief of Army Staff, Gen. Azubuike Ihejirika to join the APC, adding that this new development will further bring the South East of the country closer to the centre.

Ihejirika, a former chief of army staff, joined the APC on February 16 at his hometown in Isuikwuato, Abia-North LGA.

He was formally received into the ruling party on Friday.

Buni, chairman of the national caretaker committee of the APC, described the development as a “great moment” for the party.

“The coming of Gen. Ihejirika will increase the fortunes of the party in Abia state and the south-east generally,” Buni said.

“This is a great moment for the party as Gen. Ihejirika and other sons and daughters of the region are coming into the party to deliver the region and bring the south-east closer to the center. We look forward to more of APC presence in the south-east.”

Ihejirika, a retired lieutenant-general, served as army chief between 2010 and 2014 under former President Goodluck Jonathan.

Jonathan is a member of the Peoples Democratic Party (PDP).