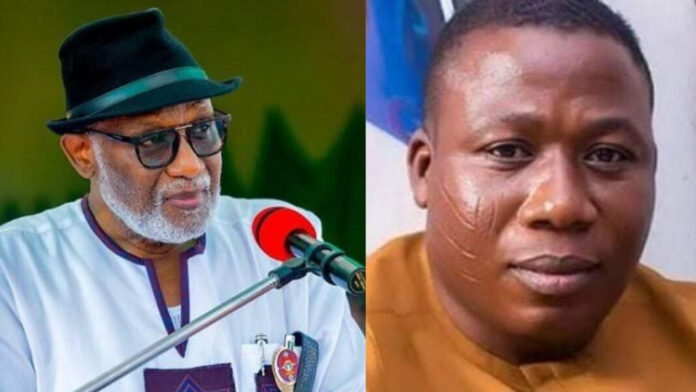 The governor spoke in Akure, the state capital, on Monday while swearing in some government officials including the new Secretary to the State Government, Oladunni Odu.

Recall that Igboho had thrown his support for the breakaway of the Yoruba nation from Nigeria, citing the invasion of Yorubaland by Fulani terrorists, lopsided appointments in public service, lack of equity in the distribution of economic and infrastructural projects, among other grouses.

Igboho had said, “Starting from now, we don’t want herdsmen in our land to destroy our farms anymore. If we meet any killer herdsman, we are going to face and destroy such.

“If any police attack us for that, we are ready for them. We don’t want Nigeria again but the Yoruba Nation. There is no essence for one Nigeria when the major resources in the country are in the hands of the northerners. Enough is enough. There is no going back.”

But Akeredolu said Ondo State, under his watch, would not be part of any secessionist agitation, adding that the state will remain in Nigeria.

The governor said, “To comment on the current agitation by some people who express grievances arising from the challenge of nationhood. The noises generated by seeming inaction or passive indifference on the part of the elected and appointed representatives of the government at all levels appear to be responsible for the growing disaffection in the land.

“There is problem, no doubt. While some have been measured in their reaction to this problem, others have been less diplomatic. It is common to find groups and individuals purporting to act or speak on behalf of the rest of us. Did you ask them to speak for us? People just stand up and say they are speaking for a people. Who invest you with that authority?

“While it is right for citizens to discuss, agitate, even fight to right perceived wrongs and even people (asking) for self-determination. I don’t think there is anything wrong with this but this must be done within an acceptable parameter. We cannot continue the way we are going, all of us must be concerned and agree to achieve a desirable end. There must be common platform through which the demands for the most mundane to the sublime be presented. There must be general consensus. This must be articulated and presented after rigorous engagements on the level of intellection and agendum for the action.”

Continuing, Akeredolu said, “Self-determination must be a collective programme of action. Nobody can speak when others are not part of it.

“Let me state unequivocally that Ondo State under my watch will stay in the Federal Republic of Nigeria as constituted.

“We recognise that there are reasons that certain anomalies be right. Nobody is running away from it but we will continue to encourage dialogue as an effective tool in resolving disputes. We will also not shy from joining others to insist on socio-economic justice.

“We will, however, not subscribe to banditry and recklessness in putting forward our demands. We will not in Ondo State subscribe to that. So, if people are shouting out there at this time, Igboho will speak for you. It is not going to work and those who have not been speaking for us will not speak for us. Let us be clear on it. We will stay in Nigeria. We are not running away.”

The governor said his state won’t be part of any self-destruction or self-annihilation like the Indigenous People of Biafra and its leader, Nnamdi Kanu, caused the South-East region of the country.