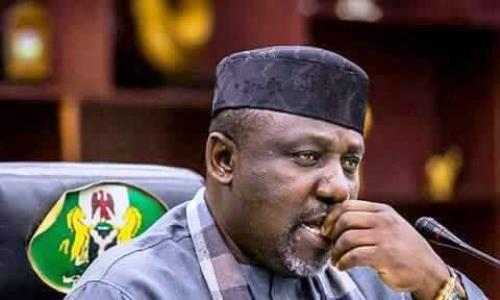 Reports fro. Owerri, the capital city of Imo State indicate that the immediate former governor of the state, Owelle Rochas Okorocha, who is also the incumbent senator representing Imo West Senatorial District in the National Assembly, was arrested on Sunday evening on the orders of the state governor.

His arrest was alleged personal supervision of vandalisation of government and security vehicles and also breaking into a property the government had seized from his wife, Nkechi.

The state Commissioner for Lands, Enyinnaya Onuegbu, gave an insight into the circumstances leading to the arrest of the flamboyant politician.

According to him, the government had recovered Royal Palm Estate on Akachi Road, Owerri, allegedly belonging to Nkechi and sealed up the place till further notice.

The seizure, according to Onuegbu, was in deference to the directive of the Imo State gazette on the report of the Judicial Commission of Enquiry on the recovery of lands and other related matters.

He said, “This is as a result of the recommendation of the commission that all illegal lands and structures acquired by the administrations between 2006 and 2019 should be taken over by the government.”

The commissioner said the current administration was doing everything to recover all the stolen properties of the state, especially those carted away by the previous administration.

Onuegbu added that in line with the 3Rs mantra initiative of Governor Hope Uzodinma, the state must continue to work in line with the relevant laws and recommendations of government agencies and commissions no matter whose ox is gored.

“On arrival, he demanded to enter the estate, telling the security personnel guarding the place that there was no court order to back up the sealing of the building,” a source said.

“Hence, he insisted on entering the building, which he eventually did after the locks were broken by his men.

“Gunshots started when two of Uzodinma’s aides, Chinasa Nwaneri and Eric Uwakwe, arrived at the place with another group of police officers and young men.

“Open confrontation started, leading to sporadic shooting. One of Okorocha’s men got hit by a bullet.”