You have the mindset of “a crisis entrepreneur”, Akeredolu fires Bauchi gov, Bala Mohammed 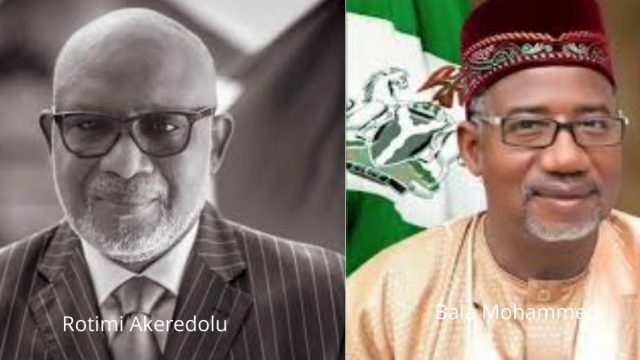 Ondo State Governor, Rotimi Akeredolu, has lambasted his Bauchi State counterpart, Bala Muhammed, describing him as a man with the mindset of a crisis entrepreneur, and therefore should be ignored by right-thinking Nigerians.

Akeredolu also warned Mohammed not to set the country on fire with his rhetorics.

This declaration elicited outrage by the Presidency, with the administration’s spokesman, Garba Shehu, a non-elected and appointee of President Muhammadu Buhari, challenging the right of governor Akeredolu, the Chief Security Officer of the state, to make such an order

Also speaking in the same vein, Bala said: “Land is in the hands of the state and federal governments in trust but Nigerians don’t need the permission of governors or the federal government to settle everywhere. You don’t need the permission of the governor of Bauchi or the governor of Ondo to be in the forests of Ondo if you choose to live in the forests because, under Section 41 of the constitution, you are free to settle anywhere,” the Bauchi State governor had said on Friday.

Reacting in a statement through his Special Assistant on New Media, Olabode Olatunde, Akeredolu urged Nigerians to disregard Mohammed’s comments.

The statement partly read, “The position of Governor Oluwarotimi Akeredolu, SAN, is not to engage or confront anyone who has the mindset of a crisis entrepreneur or warmonger. Very provoking and insensitive as the statement appears, we can only err on the side of caution by advising Governor Bala Mohammed not to set Nigeria on fire by his thoughts that are highly destructive and undermining national cohesion.

“Nigerians should ignore him and rather focus on those issues that can bring about peace and engender unity.”

Akeredolu had also slammed Mohammed for saying herders have the right to bear AK-47 rifle for self-protection.