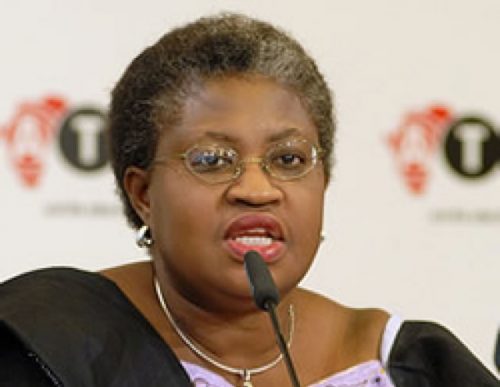 Nigeria’s image got a boost on Monday as one of the country’s best gift to the global community, Dr Ngozi Okonjo-Iweala was selected as the first female Director-General of the World Trade Organisation (WTO).

Okonjo-Iweala, whose tenure begins March 1, is the first woman and African to hold the position.

The WTO stated this in a tweet on Monday, saying, “Ngozi Okonjo-Iweala from Nigeria is appointed as the next WTO Director-General. Dr. Okonjo-Iweala makes history as the first woman and the first African to lead the WTO. Her term starts on the 1st of March 2021.“WTO members took the decision to appoint @NOIweala at a special meeting of the General Council, following a selection process that included eight candidates from around the world #WTODG.”

The former Minister had, a few days ago, received the backing of the administration of US President Joe Biden for the role.

The US Trade Representative in a statement cited her “wealth of knowledge in economics and international diplomacy” and said she had “proven experience managing a large international organization.”

Okonjo-Iweala was challenged by South Korean Trade Minister Yoo Myung-hee who later withdrew from the race for the position.