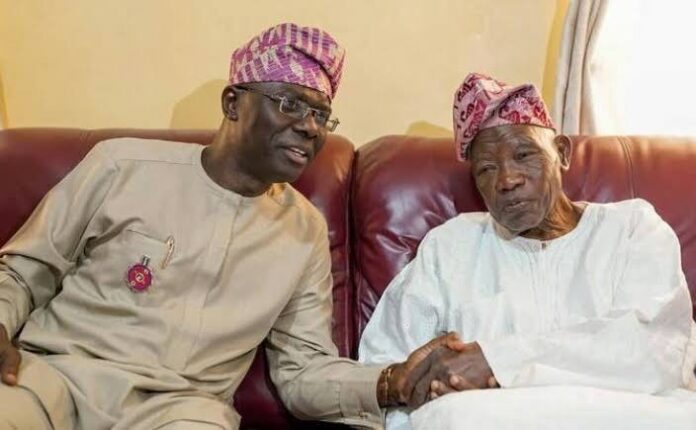 Lagos State Governor, Mr Babajide Sanwo-Olu on Sunday received notes left for him by the late first elected governor of the Lagos State, Alhaji Lateef Kayode Jakande (LKJ) when he led a delegation of top government functionaries to the Fidau prayer held for the late Awoist at his Ilupeju, Lagos residence.

The notes were handed over to the governor by a close confidante of the late politician, Mr Kamal Giwa. One of the messages is a personal ambition, which the late Jakande wanted to fulfil before his death. Details of the notes were not disclosed either by the family or members of the governor’s team.

Sanwo-Olu, who arrived at “Baba Kekere” residence at 10. 23 am in the company of the Secretary to the State Government, Mrs. Folashade Jaji; Head of Service, Mr. Hakeem Muri-Okunola; Chief of Staff, Mr. Tayo Ayinde; Commissioner for Local Government and Chieftaincy Matters, Dr. Wale Ahmed; Commissioner for Information, Mr. Gbenga Omotoso; and the State’s Attorney General, Mr. Moyosore Onigbanjo, SAN, extolled the virtues of the astute administrator.

Jakande, the Governor said, was “tremendously outstanding” throughout his public career as the first Executive Governor of Lagos and as federal minister. Sanwo-Olu said Jakande’s achievements remained the guiding light for leaders across political divides, stressing that his “sterling” leadership qualities stood him out as one of the great men Lagos had produced.

Sanwo-Olu urged the families to take solace in the legacy left by the former Governor, which, he said, remained indelible in the minds of the people who benefitted from his policies and programmes. The Governor said the manner in which Jakande passed away showed he led a fulfilled life and had departed to be at peace with his Creator.

Sanwo-Olu said: “We give glory to Almighty Allah for giving Baba Jakande many years to live on earth. No matter how long we stay on the earth, we will leave when our time is up. As humans, we don’t like losing good people, especially a personality like Baba Jakande, who was tremendously outstanding in his service to humanity.

“To have lived for 91 years, Allah has been gracious to him; despite his ripe age, Baba Jakande was not terminally ill or was being carried from one hospital to another before he breathed his last. This is a testimony that he led a good life. He was at peace with humankind and now, given the way he also left us peacefully, he is at peace with his Creator.

Sanwo-Olu said there could be nothing more consoling for the State Government than the deceased’s enduring legacy projects dotting the State’s landscape, stressing that all Jakande laboured for had remained standing from about 40 years till date.

The Governor described the late Jakande as “a builder”, who laid a foundation for the Lagos Project on which his successors had built. His exit, Sanwo-Olu said, is a loss that could not be quantified, noting that the former Governor had been immortalised before his passing and would be duly immortalised.

He said: “With every sense of humility, I can say Baba Jakande was a builder of our time, who laid foundation on which all of us have been building layers on. He was decent, humble and reflected what humanity stands for. His achievements in public service are a legacy that all of us in position of leadership must hold dear and reflect upon.

“The entire citizens of Lagos appreciate the service of this great man, who has just been called to the great beyond. The experience and all values we learnt from Baba Jakande will not be lost on us. He was a great man who lived in our time. We take solace in the fact that he led a life worthy of emulation.”

Alhaja Jakande said the Governor’s presence brought an uplifting moment to the family in their period of mourning. She prayed for the success of the Governor in office, while also urging Sanwo-Olu to protect the legacy of her husband.

She said: “For us, there is nothing more consoling than the legacy of the late Jakande throughout his public service and private life. These achievements must be protected and built upon. This visit by our Governor and members of his entourage in this period of mourning has given us an uplifting effect. It reassures us that the Government and the people of Lagos have continued to appreciate the Jakande family for the legacy my husband left behind.”