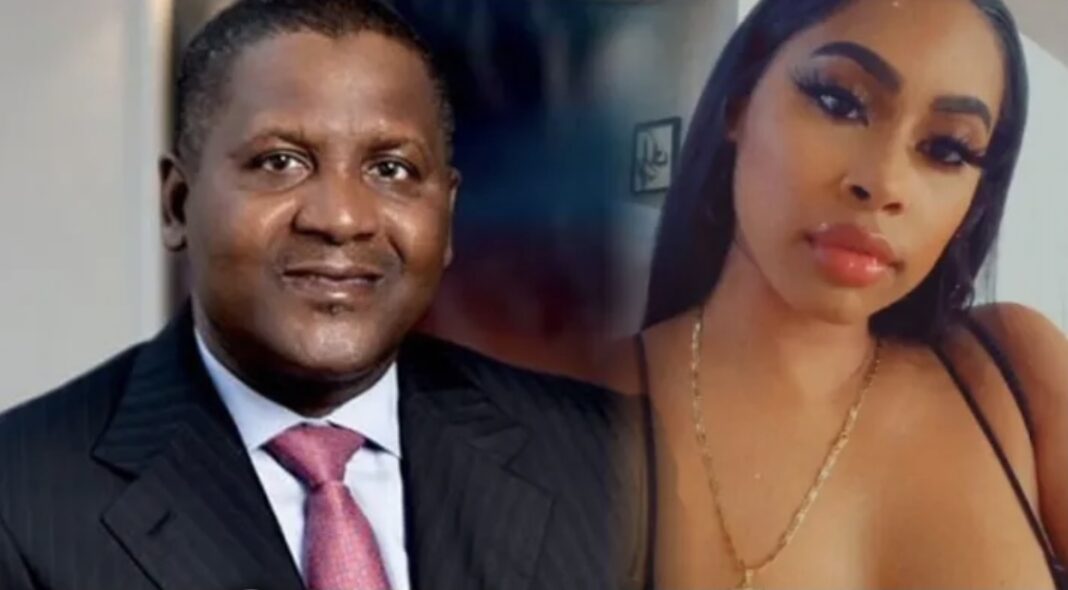 The Cement tycoon is demanding USD300,000 compensation from Spikes for battering his reputation. The lawsuit was filed in an American court in Miami, Florida.

What happened before now?

Autumn, through her Instagram account @Allarounda1, had shared an intimate video of herself and Dangote on a couch draped in an orange blanket fiddling with his mobile phone with his buttocks clearly exposed.

She also posted Dangote’s pictures alighting from a luxury plane in a private hanger, describing herself repeatedly as a ‘ForbesListSugarBabe’ a veiled reference to her lover’s status amongst an elite list of world’s billionaires.

The raunchy images were later deleted by the woman, claiming she had been flooded with requests from bloggers to comment further on her affairs with Mr. Dangote.

She also rejected claims that she took her affairs with Mr. Dangote to social media to chase undue fame.

In follow up updates, she said she was trying to clean Mr. Dangote’s name from the mess earlier created by Bea Lewis, who described herself as a restaurant operator in the United States.

What is happening now

Meanwhile, Autumn Spikes has upbraided Dangote for resorting to a lawsuit. Writing on her Instagram account, the ForbesListSugarBabe said Dangote has taken a wrong decision by making their private affair public.

She said Mr Dangote risked having additional embarrassing information about him published on the Internet as part of the suit, adding that Dangote once offered to pay her for her silence, an arrangement she rejected before the billionaire filed the suit.

“Aliko is suing me for declining his silence money.. How petty of him and his legal team,” she wrote.

She said the pair had been in a relationship for nine years without a non-disclosure agreement to gag her from publicly commenting on the affair.