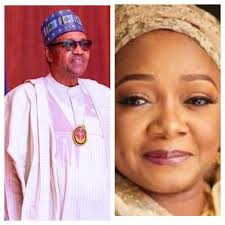 Despite the unambiguous wordings of the law that sets out the processes and requisite qualifications of a prospective Director-General of the National Agency for the Prohibition of Trafficking in Persons, also known as NAPTIP, President Muhammadu Buhari, last December, 2020, approved the appointment of an unqualified Mrs Imaan Sulaiman-Ibrahim as the head of the anti-trafficking agency.

The new NAPTIP boss, who replaced Julie Okah-Donli, dismissed by the president last year, was appointed on December 02, 2020, and formally resumed office on December 22, 2020.

The appointment attracted the ire of some stakeholders and commentators, who believed that Mrs Suleiman, a businesswoman and former special adviser on strategic communication to the Minister of State, Education, was not qualified for the position.

According to Section 8 (1) of the NAPTIP Act, 2015, any appointee for the position of the the director-general of the agency to be from the directorate cadre in the civil service or from an equivalent cadre in any of the nation’s law enforcement agencies.

“There shall be for the agency a Director-General who shall be from the Directorate cadre in the public service of the Federation or its equivalent in any law enforcement service and shall be appointed by the President on the recommendation of the Minister,” the section reads.

The Act further stipulates that the agency must have a board, to which the director-general is the secretary, and the board must be made up of representatives of the government, all of whom must be within the directorate cadre in any of the ministries of justice, women affairs, labour and productivity, the police, the National Intelligence Agency (NIA), the Nigerian Immigration Service and the National Population Commission (NPC).

These clear requisites notwithstanding, President Buhari went ahead to approve the appointment of Mrs. Sulaiman-Ibrahim who was, at best, a political appointee; a far cry from the directorate cadre qualification stipulated by the Act that sets up the agency.

Sulaiman-Ibrahim started her career working at Abuja Geographic Information Systems, AGIS, before moving to the United Kingdom where she worked as a human resources analyst and thereafter became a certified SAP-HCM consultant.

She later joined Mary Kay where she rose to the position of a senior sales director. She was a special adviser on strategic communication to the minister of state for education, Chukwuemeka Nwajiuba and a former member of the Nasarawa State economic advisory council.