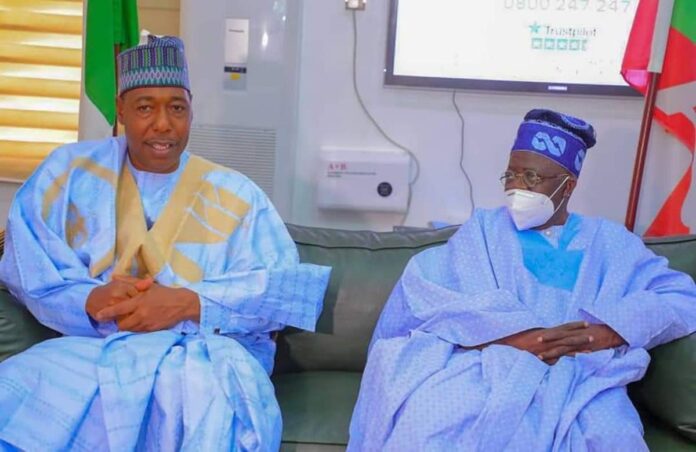 Could Asiwaju Bola Tinubu have been motivated by politics in his recent visit to far-flung Maiduguri, Borno State and yet held no discussion with the party leaders and political stakeholders in that North-eastern state? Could the APC leader have been out to feather his 2023 political nest and yet there was no closed-door session, no behind-the-scene meeting at which the matter of his ambition would be discussed? These are the critical questions for critics and political detractors who have imputed political reasons to the visit. Everything was done in the open during last Monday’s visit, which lasted about four hours.

Yet out of their desire to cast others in their mould and view people from their constricted, parochial perspectives, they framed Asiwaju Tinubu’s visit as politically motivated. They claim the APC leader was in that city in furtherance of his 2023 political ambition, even when he is yet to declare interest in the upcoming presidential race.

It is, nonetheless, worth asking: how many of those political hawks would be ready at present to undertake a trip to that North-eastern town ravaged by Boko Haram, even if for politics?

The fact is that by visiting Governor Babagana Zulum and the government and people of Borno State over the recent massacre of scores of innocent rice farmers in Zabarmari, Asiwaju Tinubu was simply demonstrating the humanity in him. Moved by compassion over the cruel fate of those farmers who were butchered by Boko Haram insurgents while tilling the soil for their sustenance and those of others, he was convinced he had to visit the state. So, for him, it wasn’t a search for validation. Nor was it a matter of political endorsement.

In Maiduguri, the APC leader condemned the gruesome killing of the farmers in clear terms, saying the farmers who he called patriots did not deserve to die the way they did. As he is wont to do, Asiwaju not only offered his support to the government to cushion the agony and anguish of relations of the deceased farmers and other victims of Boko Haram, he also offered ideas on how the nation could respond to the new wave of insurgency going forward.

He said given that the evil killers have become more daring and now wield sophisticated weapons, it is expedient for the military to change strategy. The visit was not only instructive for the support and all of that, it was even more remarkable because of the insightful ideas and suggestions on confronting the Boko Haram menace proffered by Asiwaju.

“We have seen Governor Zulum’s life being attacked on more than one occasion in a bid to eliminate him, but Allah is mighty, He has protected and will continue to protect him.”

According to him, under insurgency governance would hardly excel. “You can’t concentrate, become innovative and excel if you have to go to school and engage in developmental efforts under a climate of fear. We saw people who have endured so much agony, denial, brutality and who decided to run to their farms to develop means of livelihood, not only for themselves, but for all of us, and at the end of the day they were slaughtered. That’s not religion, it is not in our religion (Islam); it is not in Christianity either. It is an act of wickedness.”

Perhaps explaining the rationale behind the visit, he said: “I want His Excellency Governor Zulum and members of the state Executive Council to see this visit not as a condolence visit only, not a sympathy visit only, but as a symbol of solidarity and commitment to demonstrate that we must defeat all evildoers.

We have to remove these unemployed youths from the streets, from being available for recruitment by the evil-doers. Don’t tell me they are illiterates, anybody that can operate Keke NAPEP and do little repairs; anybody that can hold guns, dismantle guns and service it is no more an illiterate”.

And speaking particularly about Governor Zulum, the APC leader commended his commitment to the security of lives and property in the state. “Professor Zulum is a man of courage and brilliance. He is talented and has a great character. It is a different thing for one to be talented, it is yet another to have character. Zulum is a man who has combined talent with great character. He is courageously confronting the responsibility of governance without looking back.

“I respect the Governor, he has so much courage and strong determination. He has been consistent in this struggle, his voice is loud, he is a man rooting for peace, stability and safety of lives and property of not only the people of Borno but that of the entire country.”
In his response, Governor Zulum thanked the APC leader for the visit, which he indicated was a special one. Zulum spoke of the commitment of his administration to doing whatever it can, to protect the lives and property of Borno people.

With the visit, Asiwaju behaved like a true statesman who looks not for his own success or that of his party, but that of his country, to paraphrase the 19th Century American theologian and author, James Freeman Clarke. Indeed, strong convictions precede great actions, as Clarke had surmised.