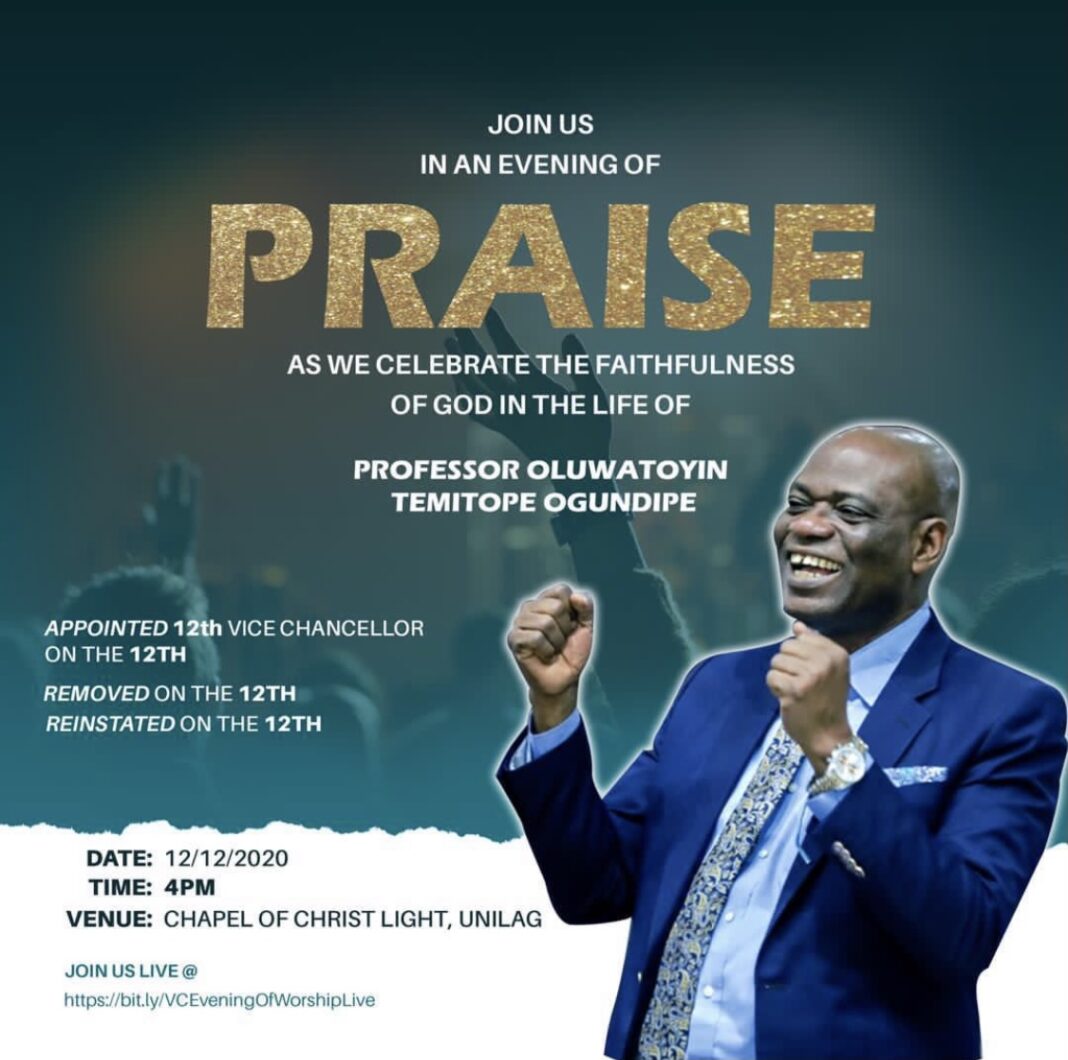 Reinstated professor of Botany and Vice-Chancellor of University of Lagos (UNILAG), Professor Oluwatoyin Temitope Ogundipe has put together an elaborate event, albeit, in a church, to celebrate his reinstatement as the vice-chancellor of the university.

The e-invite sent to colleagues and family members, a copy of which Fedredsnews is in possession, reads: “Join us in an evening of PRAISE as we celebrate the faithfulness of God in the life of Professor Oluwatoyin Temitope Ogundipe.

The event, which will be streamed live, is scheduled for 4pm on Saturday at the Chapel of Christ Light, UNILAG

Recall that Mr. Ogundipe was unceremoniously removed as the substantive vice-chancellor of the university following an indictment by a probe-panel that investigated him for corrupt practices.

The then Pro-Chancellor and Chairman of the Governing Council of the University, Dr Wale Babalakin, SAN, said Mr Ogundipe was removed because he spent N49m to renovate his official quarters without the approval of the Council.

According to Babalakin: “The financial guidelines of the University of Lagos gives the Vice-Chancellor the power to spend not more than N2.5 million in some instances without the approval of the Governing Council and anything higher must be brought to the Council for approval.

“However, Ogundipe spent N49 million to renovate his official quarters without anybody approving that.

“He also approved N41 million for the Bursar to renovate his official quarters too. That is unacceptable. He must be investigated. We need to do that for us to start building the university. I can tell you that when we probed the account of the university, it was in tatters,” he said.

In a swift reaction to his sack, Mr Ogundipe engaged the services of Mike Ezekhome, SAN, to challenge his removal in court, arguing that his removal was unconstitutional and illegal and that Professor Omololu Soyombo, who was appointed to take his position in an acting capacity, was a usurper.

To avoid a protracted crisis in the university, the federal government set up a Special Visitation Panel to investigate the propriety of his dismissal, a move that Mr. Babalakin was averse to, given the constitution of the membership of the panel. Mr Babalakin thereafter resigned his chairmanship of the governing council before the panel could submit its reports.

However, in a dramatic twist of events that caught many unawares, the Buhari administration reinstated Mr Ogundipe as the Vice-Chancellor of the University.