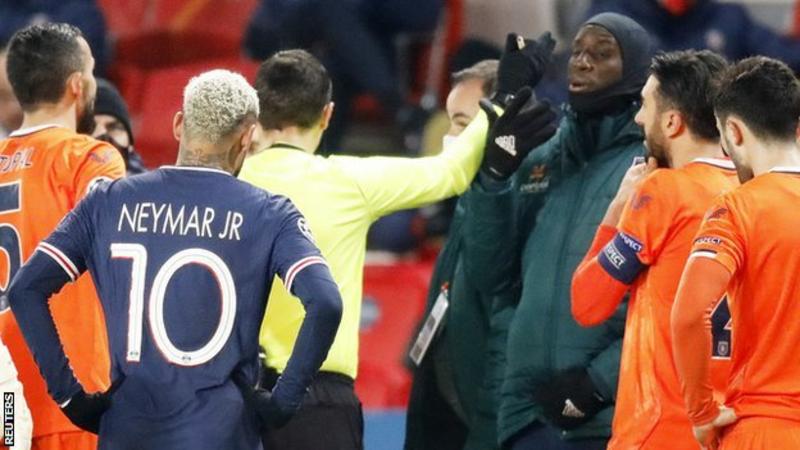 The match between Paris St-Germain and Istanbul Basaksehir was abandoned after a match official was accused of using a racist term towards one of the away side’s backroom staff.

Former Cameroon international Webo was shown a red card in an exchange on the touchline.

Istanbul players walked off the pitch in protest with PSG players following.

The incident happened just 14 minutes into the Champions League Group H tie, which was still goalless.

It will recommence on Wednesday from the 14th minute, with a new set of match officials. Kick-off will be at 17:55 GMT.

In a statement, Uefa said: “Uefa has – after discussion with both clubs – decided on an exceptional basis to have the remaining minutes of the match played tomorrow with a new team of match officials.

“A thorough investigation on the incident that took place will be opened immediately.”

Istanbul forward Demba Ba, who was a substitute, could be seen on the touchline asking the official: “Why, when you mention a black guy, do you have to say this black guy?”

Tayyip Erdogan, the president of Turkey, said he believed Uefa would “take the necessary steps”.

“We are unconditionally against racism and discrimination in sports and in all areas of life,” he wrote on Twitter.