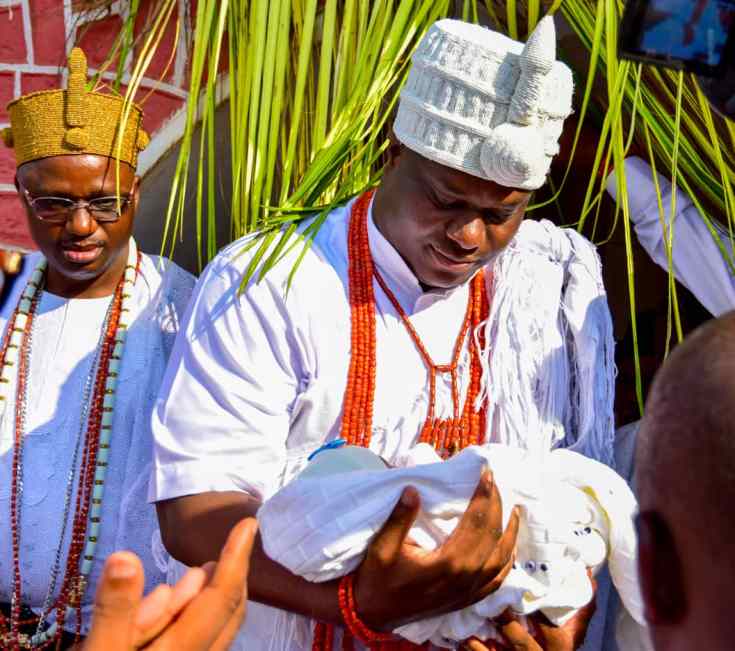 The Ooni of Ife, Oba Adeyeye Ogunwusi, on Tuesday, received his son, prince Tadenikawo, and his wife, Shilekunola Naomi, into the palace after 21-day rites.

A statement by the palace spokesperson, Moses Olafare, said the mother and child accompanied by friends and family members, were received into the palace by the chiefs and Ooni’s traditional aides.

Olafare explained that the prince and his mother, after entering the palace, stopped at Ile Nla, where they were received by relatives and friends before they proceeded to Emese’s court, where the baby was handed over to Ooni Ogunwusi.

He said, “Ooni came out through the sacred ILE IGBO in accordance with the full culture and traditions of Ile-Ife as always observed whenever the reigning Ooni receives his newly born Prince into the palace after the necessary rites of 21 days.

“After receiving his son, Ooni, accompanied by relevant spiritual aides, swiftly took him straight into the inner chamber of ILE IGBO for the necessary spiritual confirmation as demanded by traditions.

“The monarch later came out from ILE IGBO with smiles and majestic dance steps welcomed by thunderous shouts of “Kabiyesi ooooo!” “Kabiyesi oooooo!” from the waiting crowd who watched with excitements and jubilations as Ooni handed over the Prince to his elated mother who danced with the baby in her hands to her apartment at the palace.”