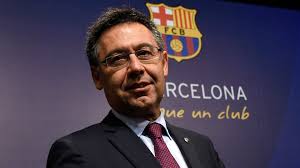 Bartomeu is understood to have handed in his notice on Tuesday afternoon before a vote of no confidence expected to boot him out.

Multiple publications in Spain reported on the news but there is not yet any official word from the club or the president.

Sport in Spain say the board of directors – also at risk of being voted out – followed him through the Nou Camp exit door following an urgent meeting just three days after Barcelona lost 3-1 at home to Real Madrid.

The Spaniard, 57, was particularly damaged by his handling of the Lionel Messi saga this summer.

After various disputes between the club and its players, Messi handed in a transfer request.

Negotiations between Messi’s dad and Bartomeu failed to resolve the differences with the six-time Ballon d’Or winnerready to quit his boyhood club after 20 years.

Messi then made a sensational U-turn to see out the final year of his contract.

Supporters gathered at the stadium to protest and demanded Bartomeu’s head – now they look to have their wish.

Fans – who hold ownership in the club – then came together and got the required number of signatures to initiate a no-confidence motion.

And Bartomeu – who was also accused of corruption in September – walked before officially being thrown out.

It comes just a day after he defended his handling of the messy Messi situation.

Bartomeu said: “I was accused of wanting to force a transfer for financial reasons to ‘balance the books.

“That’s not true. I defended the interests of the club, accepting the consequences that refusing Messi’s decision to go to one of our rivals would entail.

“I understand he may be angry about not leaving. I tried to explain to him and his family that we could not let him go. He’s the key to Ronald Koeman’s project.

“I hope in the future he says he’s happy, that he wants to renew his contract with the club and that he ends his career here.”

Now the future of the Argentine will be up for debate again as the new Barcelona chief will surely make convincing Messi sign a new deal his top priority.