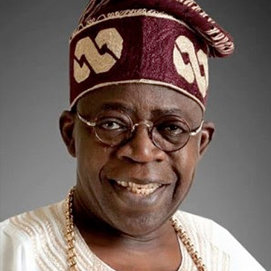 National Leader of the All Progressives Congress (APC), Asiwaju Bola Tinubu, on Sunday said he decided not to request the help of security operatives when hoodlums razed down The Nation Newspaper and TV Continental because he “did not want any bloodshed”.

Tinubu, who was a former Lagos State governor, revealed this in a statement titled, ‘The #EndSARS protests; a fundamental lesson in democratic governance’.

While Tinubu confirmed that he is a financier of the media houses, he denied having any financial interest in the Lekki toll plaza.

He said, “On the other hand, I am, indeed, a promoter and financial investor in the Nation newspaper and TVC. It was widely known and circulated through social media that certain malevolent elements were going to take advantage of the situation to attack the Nation newspaper facilities and TVC in Lagos.

“The attackers came. Both facilities were significantly damaged. Although equipped with prior notice of the imminent trespass, I did not call anyone to seek or request for the army or police to deploy, let alone attack, kill, or injure those who razed and vandalized these properties. I did not want any bloodshed.

“These elements, mostly hirelings of my political opponents, wreaked their havoc and destroyed those buildings and facilities and I thank God that the employees of these two media institutions managed to escape largely unharmed.

“There is a deeper truth involved here. Burned buildings and damaged equipment can be rebuilt or replaced. There is no adequate substitute for the loss of even a single human life. I am not one to encourage violence. I abhor it. Thus, I did nothing that might endanger lives, even the lives of those who destroyed my properties.

“There is no rationale that can adequately explain why I would order soldiers to repel peaceful protesters from the toll gate where I have no financial interest, yet, choose to do nothing to protect my investments in the Nation and TVC.”