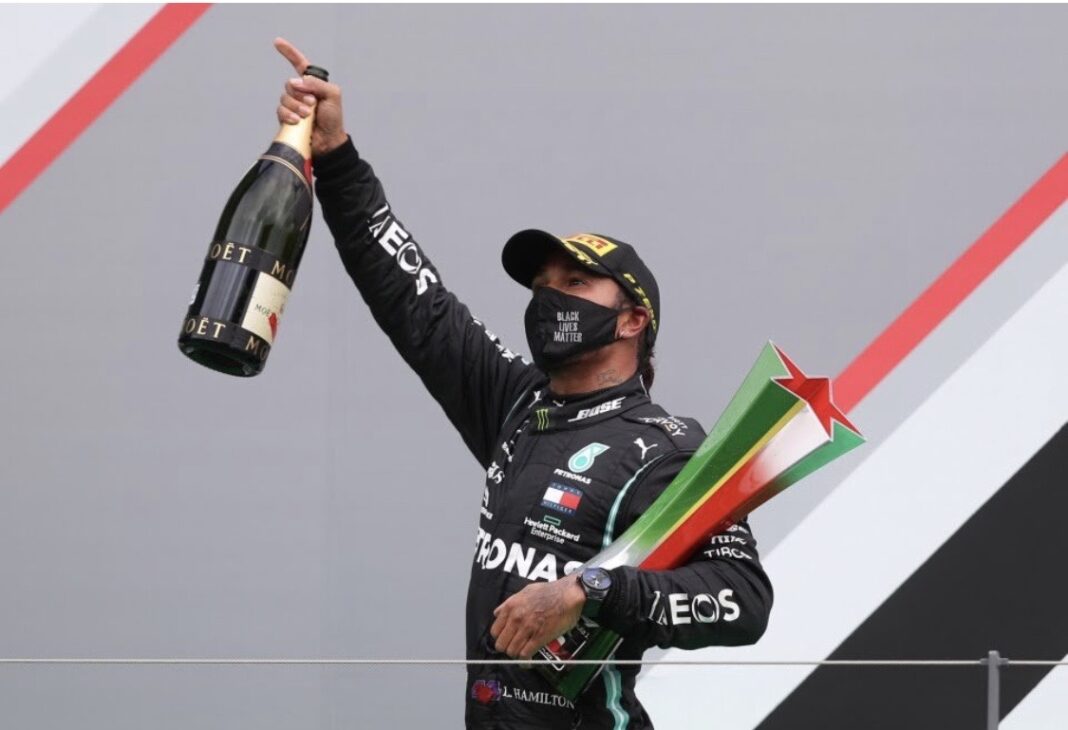 LEWIS HAMILTON officially holds the record for most Formula One win after taking first place at the Portugal Grand Prix.

The British star, 35, stormed to victory to take his win-tally to a staggering 92 – one ahead of legend Michael Schumacher.

But it’s not just on the track Hamilton has been making headlines during his illustrious career.

Hamilton has been dating – or rumoured to have been dating – a host of famous faces down the years, including Nicole Scherzinger, whom he dated on and off between 2007 and 2015.

He’s also been in the headlines for his lifestyle down the years, such as urging fans to go vegan.

But one constant in his life has been his family, some of whom have been there from his go-karting youth to see him become one of the greatest F1 racers to ever set foot in a cockpit.

Here we take a closer look at the Hamilton family…

HAMILTON’S dad, Anthony, is a major reason the Stevenage-born star even got into racing.

He bought Lewis his first remote-controlled car when he was just six-years-old – and his first go-kart for Christmas when he was seven.

Anthony would help Lewis break into the world of go-karting, where he spent seven years working his way from the Rye House Kart Circuit in Hertforshire to Formula Super A stardom.

Hamilton Snr was Lewis’ manager throughout his racing career up until 2010, when he was ruthlessly sacked.

Two weeks before the F1 season started, Lewis downplayed the incident, saying: “Dad will miss being here, but it was me who initiated the break.

“He’s got other things to focus on, and I don’t want my dad being my manager anymore.”

However, Anthony later revealed the true extent of the drama, admitting: “He thought, ‘Do you know what dad? I am fed up listening to you’.

“He decided he wanted to be his own man. I was comfortable with that.”

Anthony later suggested Lewis had withheld a £3million payment he’d promised him as a ‘thank you’ for his 18 years of service.

He revealed: “It just never happened. I am comfortable with it. It’s not my business. If he says he’s going to do something and he doesn’t that’s his loss.”

Anthony was married to Hamilton’s mum, Carmen Larbalestier, but the pair separated when Lewis was just two-years-old.

WHILE Anthony was seen at almost every race of Lewis’ career in the early days, mum Carmen was always a more elusive figure in the racer’s life.

But Lewis actually enjoyed more of his formative years living with his biological mum.

The F1 superstar was raised by his mum until he was 12-years-old – along with half-sisters Nicola and Samantha.

He then moved to live with dad Anthony, step-mother Linda and his half-brother Nicolas.

While Carmen hasn’t been a regular at Lewis’ races – she has always been there for the big moments – with the pair said to enjoy an excellent relationship.

At the Chinese Grand Prix in 2008, two weeks before he became a world champion for the first time, Larbalestier was seen embracing her son and his stepmother Linda.

And Hamilton’s mum shared another hug with him after he secured his fourth world title in Mexico in 2017.

The world champ also went to the trouble of holding a surprise 60th birthday party in London in 2015 – even getting Jessie J to sing at the bash.

Speaking about her break-up with Anthony, Carmen once revealed: “Lewis was the best thing to come out of my marriage. [The split] didn’t damage Lewis.

“He is probably better for it than if we had stuck together in an unhappy marriage.

“Tony wanted to be somebody and he has achieved that. I wanted the quiet life and that put a barrier between us. I couldn’t see myself in that busy, hectic lifestyle.

“But I didn’t stop him making sure Lewis got what he wanted. Without his dad’s constant, constant work he would not have been able to continue.”

AFTER his early years with his mum, Lewis moved to live with his dad and brother aged 12 – joining step-mum Linda.

Anthony had already been with Linda for two years – and she took an active role in raising Lewis before he moved in with her.

Linda was regularly spotted at races alongside Anthony, even after he was sacked as Lewis’ manager.

And she shared a sweet moment at the Chinese GP in 2008, when she hugged Lewis – along with his birth mum Carmen – following his victory just weeks before he sealed his first world crown.

Linda is the birth mum of Lewis’ half-brother, Nicolas.

THE younger son born to Anthony, Nicolas lived with Lewis after he moved to join his dad and step-mum Linda aged 12.

Nicolas was born with cerebral palsy – a disease affecting movement and coordination.

However, he has never let that hold him back, with the 27-year-old also a racing driver.

Nicolas drives a modified car in the British Touring Car Championship – where he has started 36 races.

In 2015, he secured a deal with AmD Tuning to race an Audi S3 for five events in the BTCC – totalling 12 races – becoming the first-ever disabled driver to compete.

And earlier this year, he secured his first full-time gig, signing up to drive for Motorbase Performance.

As well as his two seasons in the BTCC, Hamilton also spent four years driving in the Renault Clio Cup UK and one in the European Touring Car Cup.