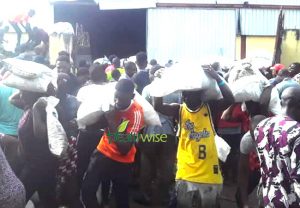 Lagos Govt: The attack is regrettable and condemnable

Hundreds of hungry Lagos residents, taking advantage of the current state of lawlessness in the state, broke into a warehouse located at Benster Crescent, popularly called Monkey Village, at Amuwo-Odofin local government, as early as 8 am, and carted away food items.

The looted food items were donated to the state by the Private Sector Coalition Against Covid-19 (CACOVID) on September 22, 2020.

Eyewitness told Fedredsnews that some soldiers also participated in the looting.

The private sector-led organisation was established in March 2020 to assist the government in combating the novel coronavirus disease, COVID-19.

The items, which were labelled ‘CACOVID, NOT FOR SALE,’ included bags of rice, macaroni, spaghetti, salt, garri, sugar and cartons of noodles.

The food items were received on behalf of the state government by Lagos State Governor, Mr Babajide Sanwo-Olu at the Lagos House, Alausa, in company of the Deputy Governor, Dr. Obafemi Hamzat; Chief of Staff, Mr Tayo Ayinde and the Acting Commissioner for Agriculture, Abisola Olusanya, among other state officials and representatives of CACOVID.

It promised that it would soon begin the distribution of the 107,546 food palliative packs worth N1.4 billion to Lagosians, especially the vulnerable and under privileged in the state.

Meanwhile, in its reaction to the incident, the state government condemn in strong terms, the looting of the warehouse, saying that the warehouse in question was not state-owned but was made available to the CACOVID team.

The statement titled, ‘Lagos Regrets Vandalisation Of Warehouse For CACOVID Food Palliatives’, was signed by the Acting Commissioner of Agriculture, Abisola Olusanya.

The statement read in part: “The State Government had been allowed to commence rebagging of food items allotted to it from the quantities meant for the South-West States,” a statement said.

“The rebagging was being done to account for each beneficiary receipt, as was required and monitored by the CACOVID team.

“The distribution was on-going but had to be halted due to protests, before the invasion of the warehouse today.

“For effective distribution of the food palliatives, groups such as Transport Unions, Ethnic Groups, Religious Associations, Artisans and Tradesmen Association, Marketmen and Women Association, People Living with Disabilities, Orphanages and Old Peoples’ Homes among others were being used as distribution channels to their members.”