Update: Building was sealed by govt before collapse 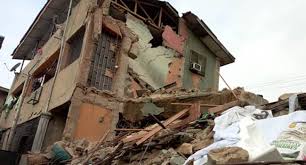 The building collapsed earlier on Sunday, leaving at least seven dead and more than ten injured, five of them critically.

In a tweet Sunday night, LASEMA stated that the building had been sealed by the LASBCA but the owner commenced clandestine operations early hours of Sunday mornings that led to the incident.

“The Agency wishes the public to note that the building at the above captioned address in fact had been sealed by LASBCA,” the agency tweeted.