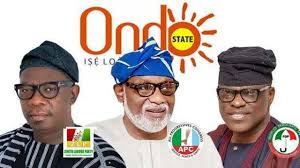 The objective of the exercise was to deny a safe haven for militants and those who are wont to constitute a threat to the October 10 governorship election in the state.

Speaking with reporters after the exercise, the Brigade Commander of the 32 Artillery Brigade, Brigadier General Zakari Abubakar, said the operation was to send a strong signal to trouble makers on the waterways and creeks that the military is committed to a violence-free poll.

“The purpose of today’s exercise was to get prepared for the October 10 gubernatorial election.

“We want to ensure that the election is free and peaceful and make sure that hoodlums don’t interfere.

“The places visited lead to Delta and Ogun States and they will be coming. But I want to assure you that whenever they come from, we will give them blocking force.”

According to him, the military was aware of several camps that are springing up on the waterways. He said that the exercise was able to destroy one hideout of hoodlums at Asere.

He enjoined prospective voters not to exercise any fear but come out and vote just as he assured them that the security agencies would protect and provide a conducive environment for them.

Similarly, Capt. Mohammed Ahmed, the Commanding Officer of the Forward Operation Base (FOB) of Nigerian Navy,  Igbokoda, explained that the exercise was continuous readiness to secure the waterways from any criminal activities especially when the state gubernatorial poll was approaching.

Ahmed said that ” It is to assure people that we are always there to secure the environment for them and inform hoodlums that we are watching because security agents are ready and it was a successful exercise.”