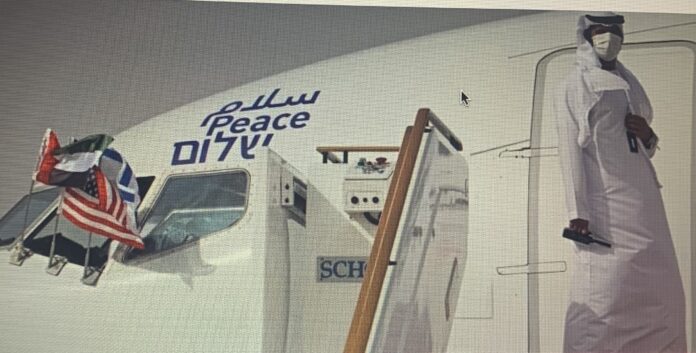 Saudi Arabia announced Wednesday that flights to and from the United Arab Emirates “from all countries” will now be able to use its airspace. The statement means flyovers to and from Israel to the UAE will be allowed.

While the statement avoided naming Israel directly, it is clearly directed toward the recent agreement reached between the UAE and Israel.

On Monday, the first-ever commercial El Al flight to the UAE was given permission by Saudi Arabia to use its airspace, cutting the flight time by half to 3 1/2 hours. It wasn’t known until the day of the flight whether permission would be given. Without the Saudis’ OK, the flight would have been forced to take the long way around the Arabian peninsula with a flight time of over seven hours.

The news signals that Saudi Arabia tacitly supports the agreement between the UAE and Israel. Indeed, it has been reported that the UAE would never have made the deal if the Saudis hadn’t given their approval.

Officially, Saudi Arabia says it will not sign a similar deal with the Israelis until the Palestinian issue is resolved.

The opening of Saudi skies is good new for tourists, as well as for Israel’s national carrier El Al and the two UAE airlines, as it will be easier to travel between the two countries. Israelis are already eager to hop on a plane to visit the Arab country. Israelis are known for their love of travel and their free-spending ways as tourists.

“For years, I have been working to open the skies between Israel and the East,” he said, hailing the “tremendous breakthrough” that Israeli planes can now fly cheaply and quickly from Israel to the Emirati capital of Abu Dhabi and skyscraper-studded city of Dubai.

The official Saudi Press Agency said the statement was in response to a “request by the UAE” for flights to and from the country.

On board the Monday flight was a U.S.-Israeli delegation led by Senior Trump Advisor Jared Kushner.

“For me to fly over here today was a tremendous honor,” said Kushner, who played a key role in brokering the peace arrangement. “I believe that this agreement has the ability to change the whole course of the Middle East.”

Progress was made during the talks with Israel and the UAE as they signed their first bi-national agreement Tuesday for cooperation in banking and financial services, including the war on terror.

“Today we signed the first agreement between Israel and the United Arab Emirates on cooperation in the field of banking and finance. The agreement will help us promote huge investments in Israel that will bring more money to citizens and more jobs,” Prime Minister Benjamin Netanyahu tweeted.

It has been reported that a formal signing ceremony at the White House may take place this month.