Abandoned Project Saga: You will hear from me soon, Mimiko replies Akeredolu 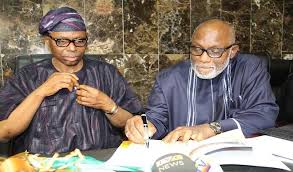 A former Governor of Ondo State and the promoter of Zenith Labour Party (ZLB), Olusegun Mimiko, has advised his party members to calm down, adding that he would soon respond to the political jibe thrown at him by the incumbent governor, Rotimi Akerwdolu, who accused him of abandoning some projects during his eight-year administration in the state.

Mimiko said this at his Ondo country home on Friday while receiving the deputy governor of the state, Agboola Ajayi who is running for the October 10 governorship election on the platform of Mimiko’s Zenith Labour Party.

Akeredolu, while inaugurating some projects on the campus of the Olusegun Agagu University of Science and Technology, Okitipupa, last week accused Mimiko of abandoning some projects in the school.

The two-term governor described the ZLP candidate as a well-groomed and seasoned politician who has learnt a lot in politics.

Mimiko said, “We don’t expect any surprises. Agboola has seen and exercised power. He has a good head and a good heart for governance. This is not the time for a campaign but I will tell my friend (Akeredolu) why he was able to do what I could not do in eight years.

“Any party that does not drive in the direction of removing the burden of looking for money for reproductive health cannot be called a progressive.”

In his remarks, Agboola described Mimiko as a leader of politicians who was able to manage all of them for eight years.