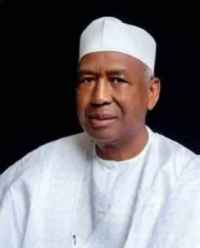 For decades, I had known him as a politician, businessman, and media entrepreneur. His reputation was as impressive as his height.

But my first close contact with Mallam Ismaila Isa Funtua was as an adversary in 2013. In fact, it is one of the ‘greatest comebacks in history’ that we eventually became quite close, and we began to exchange confidences. I also visited him at home many times.

How did it all begin?

I had served as a member of the Standing Committee of the Nigerian Guild of Editors (NGE) under the presidency of Mr Gbenga Adefaye, whom I consider a brother and senior friend.

In fact, he was the one who directly invited me to contest for a position in his team, when he was aspiring for office. Fortunately, I ran, and was elected.

For the four years that Adefaye’s Presidency lasted, it was a delight serving with him. I must also say I learnt a lot, and was well tutored in the operations and administration of the NGE.

Adefaye is an Ile-Ife man, while I am from Ipetumodu, just about ten minutes drive away. That made us kindred. And to make the ties stronger, his wife is from my community, and I usually call her ‘my sister.’

A search began in late 2012 for who would become the next NGE President, as Adefaye’s two terms of two years each gradually wound down. I didn’t have an ambition. Don’t forget that I actually went to serve because my friend, brother and respected professional superior was the President.

And then, something happened! We were in Benin, the Edo State capital, for that year’s All Nigeria’s Editors Conference (ANEC), the biggest and largest annual gathering of editors across all media platforms.

I was resting in my hotel room, after the day’s activities, when I heard a knock on the door. I welcomed a three-man team, including a former president of the NGE.

What was their mission?
“We have come to invite you to contest for NGE President when Adefaye finishes his second term next year.”

Shock was an understatement. I was completely taken aback. Hey, I had never considered it. Not for one moment did it ever cross my mind.

My first response was to tell them that it was impossible. Just like Nigeria, the NGE has an unwritten agreement about leadership. It must rotate between the North and the South. How then can an Ile-Ife man finish, and an Ipetumodu man succeed him? If you shouted loud enough from one of the communities, you would be heard loud and clear in the other. How then can it be?

But the delegation told me it was something they had considered, and that the NGE was a professional association, which should not be subjected to all the considerations of partisan politics. And they promised to back me all the way, informing that they had consulted widely before coming to meet me. I looked at their composition. It was a rainbow coalition, from the major tripod that constitutes the country.
I thanked them, and they left.

Yes, you guess right. The first place I headed to thereafter was Mr Adefaye’s room. I briefed him. From his reaction, it was crystal clear that he knew all about the meeting. The team had apparently met with him, before it met with me. He encouraged me to give it a shot.

An Ipetumodu man succeeding an Ile-Ife man in office? It ran completely contrary to the principles of zoning. He repeated the same thing the team that met with me had said: we are a professional association, not partisan politicians.

Curiously, after some thought, I began to like the idea. President of the Guild of Editors! Very attractive. But also, the work. A whole lot of work, as I’d seen the Presidents of the past doing: Chief Onyema Ugochukwu, Mr Biodun Oduwole, Mallam Garba Shehu, Mrs Remi Oyo, Baba Halilu Dantiye, and Adefaye.

Then a spanner was thrown in the works. It was January 2013, with elections weeks away, when I got a phone call from one of my allies.

“Mallam Ismaila Isa Funtua has told us to tell you that you can’t run, and you should step down. He says how can an Adesina succeed an Adefaye? He says it’s the turn of the North, and he’s one of our very respected elders. We have to obey him.”

I kept my cool. For me, becoming NGE President was not a matter of life and death. I didn’t even have an ambition originally. The convention, in which elections would be held, was already scheduled for Ibadan, in Oyo State. Step down or go the whole hog?

I decided to consult again. You know what I found out? Heck! Heck again and again. All those I spoke to, including friends from the North, stuck to their guns. I should contest, and they would be with me, stand by me all the way.

I made up my mind. Let’s go to the polls, and let the better man win. Mallam Isa raised a candidate from the North, and tried to mobilize the region in every way. But my supporters from the North were in their numbers. Friends and brothers. Names and details in future, surely.

We campaigned round the country. I got assurances from every corner. And so, to the polls we went. The result was a landslide in my favor, with majority of the delegates from the North and South voting for me. It was democracy in action.

The election ended late on a Friday night at Premier Hotel in Ibadan. We were still jubilating at the victory, when my phone rang. Who was at the other end? Mr Ita Ekpeyong, Director General of the Department of State Services (DSS). He told me they had been monitoring events, and congratulated me on my victory.

“Now that you are NGE President, please use the position to unite the country, “ he counseled. I thanked him.

The next morning, who called me next, as we were at breakfast table? Muhammadu Buhari. Former military head of state, three-time aspirant for the presidency of the country. He congratulated me, wishing me a successful term in office.

The groundswell of congratulatory messages from round the country was overwhelming. But from Mallam Isa, mum was the word. The silence was thunderous, foreboding, thick enough to cut with a knife.

The campaigns were a bit acrimonious, but with elections concluded, we were one big family of editors again. I and my challenger teamed up, became quite cordial again, and the relationship lasted till he sadly passed away some years later.

It was Adefaye who first spoke to me about the need to reach and pacify Mallam Isa. I concurred. He asked me to visit the man at home in Abuja, which I did.

The lion was in its den, and I approached with trepidation. Would I become mincemeat? No need to fear. He welcomed me with open arms, and we immediately struck a friendship that lasted all his life. He said his opposition to my candidacy was nothing personal, but something meant to strengthen the cohesion of the country. From then, we began to talk on phone almost every Friday, whenever he read my weekly column in Daily Sun. Any week I wrote about a possible Muhammadu Buhari Presidency, the discussion was usually quite robust. He was a believer in the cause. Strong one.

Let me make a revelation, or rather, two, at this point.

On March 31, 2015, final results of the presidential polls were coming in. As Managing Director/Editor-in-Chief of The Sun Newspapers, I had worked late, closing about 11 p.m. Got home shortly before midnight, and by then, the last result had been announced, showing that General (as he was then) Muhammadu Buhari had been elected President. I felt fulfilled, as I had supported him right from his days as a military ruler.

My phone rang shortly after midnight. The voice was unmistakable. It was Mallam Isa, and he said, “Please hold on for the President-elect.”

Gen Buhari came on the line. And he said:”Adesina, I want to thank you very much. Thank you for your support all these years. There are people who could have paid you in millions, but you chose to support me, when I couldn’t even give you a bottle of Coke. Thank you very much.”

The second revelation. Date was May 31, 2015. The new President had been inaugurated two days earlier. I had attended the event at Eagle Square, Abuja, but was back in Lagos. I was home, a Sunday, and it was about 5 p.m.

A phone call, and that familiar voice again. Mallam Isa.

“Your name will be announced tonight as Special Adviser on Media and Publicity to the President. Should we go ahead?”

The buzz had been round town for some days. And I’d had time to think about it. I was not a government person, and never aspired to be. I enjoyed my job as a newspaper man. I had also just been elected for a second two-year term as NGE President. Should I give all that up, and go serve in government, which for me was like terra incognita? An uncharted terrain. But for Muhammadu Buhari, I would do anything. So, I told Mallam Isa that the announcement could be made. And as they say, the rest is history.

In my early days in government, and till his sad passage, Mallam Isa was only a phone call away. And his house only ten minutes drive away. I visited mostly on Sunday afternoons, on my way from church.

The news of his death hit me like a bolt from the blues. He always looked healthy, regal, a grand old man. But death. Is that not a debt we all owe? All mortals are doomed to death.

Mallam Isa not only reconciled with me, he also did with all my allies from his part of the country, who led my campaign and voted for me as NGE President. He was an adversary that later became a dear senior friend. Adieu. Rest in perfect peace.