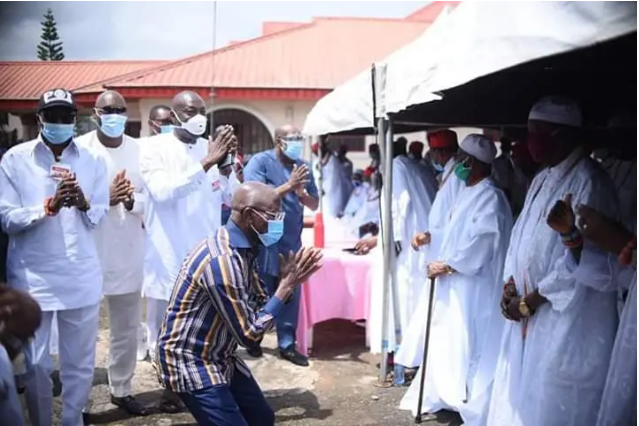 May the soul of aunty Remi Oyo rest in peace. Late Aunty Remi was president Obasanjo’s spokesperson. Aunty Remi had no iota of respect for Adams Oshiomhole as a Labour leader because of his Hyde and Jackyl predilection.

As the number one Labour leader, Adams would huff and puff, mobilizing us, the Labour and civil society for one strike and protest or the other. With his oratory, he would make the necessary noise for sound bites. We would go out to mobilize to shut down the country. We didn’t know he was playing to the gallery and this is where aunty Remi comes in.

Aunty Remi would tell some of us -“nothing would happen tomorrow. Adams just left the Villa. Eyin kon se aluta lo, a ti pari ise pelu oga yin. (you people are just doing Aluta. We have sorted out everything with your leader).

Just as aunty Remi said, the next thing we would hear next morning was that the strike and protest had been suspended. Aunty Remi knew what usually transpired at the Villa’s nocturnal meetings. Reason she had no respect for Adams till she passed on.

So, since Adams is in the mood of apologia as he did yesterday in Benin, kneeling, purportedly apologising to Benin Chiefs for bringing Obaseki as Governor instead of Ize-Iyamu, when is he going to apologize to us for goading us for strike and protests, only to compromise the action at the dying minutes?

When is he going to apologise to the widows of Chima Ubani and Tunji Oyeleru, who both died along Maiduguri-Potiskum road in Adam’s official land cruiser SUV number “NLC 1”? Chima was the Executive Director of Civil Liberties Organization, CLO, while Tunji was the photo Editor of Vanguard. They had accompanied Adams in a mobilisation tour of the Northern parts of the country in September 2005. When they were through in Maiduguri, they had boarded a Chachangi plane en route Lagos. Adams entered last but he had no seat. Chima offered his seat and chose to go by road with Tunji. They died in an accident on September 23, 2005.

Chima died Adams death and despite this, Adams abandoned the widows of Chima and Tunji. He did not even have the decency to attend their burials. When is he going to apologise to their widows, not just to Benin Chiefs for cheap political capital?

Thank God for Asiwaju Tinubu. He paid a condolence visit to Chima’s widow and was shocked that that was where Chima lived. He immediately asked Dele Alake to arrange for a generator for the house. He followed this up by giving a house to Chima’s widow and scholarship to two out of the four children. God bless Asiwaju. Adams was nowhere to be found.

While Adams was governor and had every opportunity to assist them, he didn’t. After much pressure, he reluctantly released N1million to the family, after Mrs Comfort Jiti-Ogunye accompanied Ochuwa, Chima’s widow to Adams in Benin. The widow waited for about three days before Adams sent an aide to go give the money to her, which was less than what he used to give to these smalls girls swarming around him as Governor. He didn’t even have the courage or courtesy to see the woman. He sent an aide. I knew at a critical time, l had to cough out N100,000 for the family when Adams was in a position to give the widow a contract to assist her. When is he going to apologise to her?

When Gani Fawehinmi was very very sick and came back into the country, only very few of us knew he was in the country. I reached out to those close to the then Governor Adams to come and visit the ailing Gani. He didn’t, till the man died. On the day Lagos government was holding a special tribute for Gani at the police college, Ikeja, late Comrade Olaitan Oyerinde, Adam’s PA called Mrs Fawehinmi, stating that Adams wanted Gani’s body to be brought to Benin for a special tribute. Mrs Fawehinmi asked Olaitan to liaise with me. He did and l asked him to ask his boss to call me. Adams did and l told him point-blank, that that wasn’t in the itinerary of the burial committee and that we won’t bring his body to Benin, despite his entreaties, saying that he was ready to pay for a chartered plane for that purpose. I reminded him that when he was sick and l asked him to come and see him, he didn’t. Now, he wanted to show off.

Eventually, as a compromise, Madam Fawehinmi asked me and some other comrades to accompany two of the children to the Benin tribute session. When is Adams going to apologise for refusing to see ailing Gani when l pleaded with him?

So, Adams’s political apologia to Benin Chiefs yesterday was deceptive, hypocritical and self-serving. Assuming Ize-Iyamu wins the next election and they fall out, as they are bound to, is he also going to gather the Benin Chiefs again to apologise? Adams hypocrisy knows no bounds.