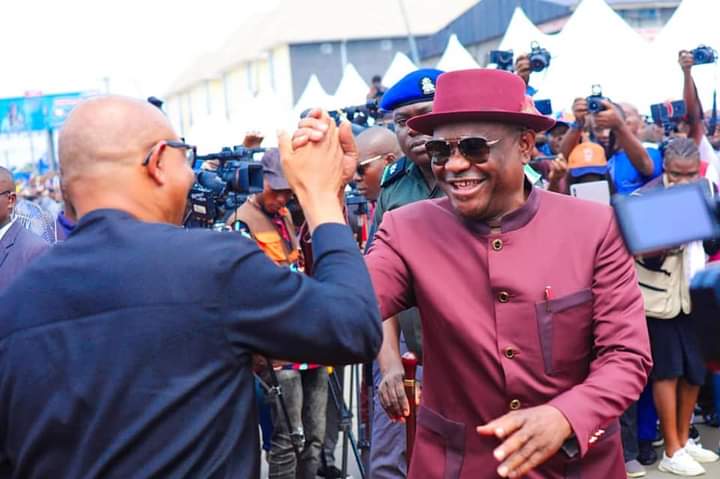 “Some people now are criticising Buhari for appointing all the service chiefs from the North, why did they not challenge Buhari since? Election has come and they are talking. Who is fooling who”?

Governor Nyesom Wike of Rivers State has vowed to remain in the main opposition party, the Peoples Democratic Party, PDP to fend off  persons he described as vultures, hyenas and scavengers.

The Governor made this statement on Thursday when he led the presidential candidate of the Labour Party, LP, Peter Obi to inaugurate the Nkpolu-Oroworokwo Flyover in Port Harcourt, Rivers State.

Wike, who said he would not blame the presidential candidate of the Labour Party (LP), Peter Obi, for leaving the party following the humiliation he suffered, insisted he would not leave the party for criminals.

He said: “You were a member of our party, you left our party and I know why you left the party. I don’t blame you for leaving the party. Nobody would have suffered the humiliation you suffered. I know. Most of you don’t know. Nobody will hear what you passed through and still remain in the party.

“I will not leave. I will stay here and I will fight the vultures, the hyenas and the scavengers. I am not blaming you. On principle, you should but me I won’t leave this house. I will never allow robbers to take over my house. I am going to stay to chase the armed robbers.

“If you have not left you would not have pursued your ambition to save Nigeria. That is his ambition, but whether he is the one I do not know yet. At the appropriate time, we will talk”.

Apparently referring to the attack on President Muhammadu Buhari by the Peoples Democratic Party (PDP), Atiku Abubakar, over alleged lopsided appointments of service chiefs, Wike wondered why it took Atiku over seven years to speak on the matter.

Besides Wike asked persons making such remarks to first correct the lopsided leadership positions in the PDP before the people would take them serious.

He said: “When I hear people go to town hall meetings and they say all kinds of things they say. They say “I will implement restructuring, they will make sure every zone will have a member in the security council, that it is not good for one zone to produce all the security chiefs”.

“But it is good for one zone to occupy all party positions. You see how we are. He said ‘I will implement that every zone will be represented. That is a town hall meeting. But Nigerians want you to start from this one. When you start from this one, we will know what you will do when you get there. Start from the party.

“Why are Nigerians so gullible that anything they hear they take? If you want to say ‘I will implement this or do this’, I will say okay this one you have now start from here. If you cannot do this one, can you do the other one when you are there?

“Nobody should deceive us. There are many people, who have left offices for years, you see those who are surrounding them, are broke. All they want to do is to have the opportunity to come back to power. Nigerians must open their eyes.

“Some people now are criticising Buhari for appointing all the service chiefs from the North, why did they not challenge Buhari since? Election has come and they are talking. Who is fooling who?

“All these past seven years, you couldn’t challenge Buhari of doing that and now the election has come and you want to win our hearts. We know ourselves. Nobody can fool anybody. Some people say they would form a government of national unity. It is not talking, start now to implement it”.