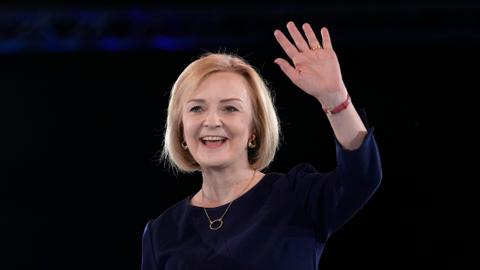 The United Kingdom will have another female prime minister as Liz Truss won a leadership race for the governing Conservative party on Monday, vowing to press ahead with promises of tax cuts and to deal with a growing energy crisis. Truss, who is the incumbent foreign secretary defeated former Chancellor Rishi Sunak by 81,325 votes to 60,399 which represents a 57.4 percent majority.

She will succeed Boris Johnson as the country’s 56th premier after formal appointment by the Queen at Balmoral tomorrow.

Analysts believe that Truss, considered as a front runner in the race was able to breast the finishing line by wooing grassroots Tory members with her promise of bumper tax cuts.

She’s coming at a time the country is witnessing the most daunting economic crisis since the 1970s with galloping inflation and stunted worrying economic indices.

Giving her victory speech in Westminster, the PM elect said: “I will deliver a bold plan to cut taxes and grow our economy.

“I will deliver on the energy crisis dealing with people’s energy bills, but also dealing with the long term issues we have on energy supply.”

She is expected to announce her energy plans within the next week to cushion Brits from crippling bill hikes.

Freezing energy prices is on the cards, as is dishing out more cash help for the poorest in society.

In her speech she also rallied members to pull out the stops ahead of the next election in two years time.

She said: “We will deliver a great victory for the Conservative Party in 2024.”

Truss pays tribute to outgoing BorisLiz Truss said: “I want to thank our outgoing leader, my friend Boris Johnson.”Boris, you got Brexit done. You crushed Jeremy Corbyn. You rolled out the vaccine, and you stood up to Vladimir Putin. You are admired from Kyiv to Carlisle.”

Johnson and Truss will, on Tuesday, travel to Balmoral Castle in Scotland, where Queen Elizabeth II is staying.

Johnson will tender his resignation and soon after, in a ceremony known as ‘kissing hands’, Truss will ask the queen for permission to form a new government.