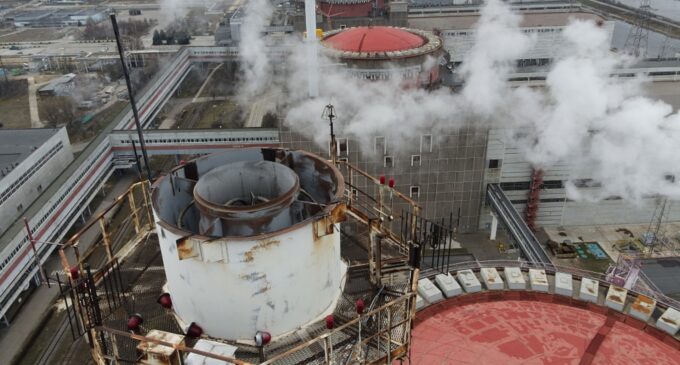 According to Reuters, Zelensky blamed the incident, which happened on Thursday, on the persistent shelling of the area by Russian troops.

He said a bombing spree sparked fires in a nearby coal power station, causing the supply to the nuclear plant to go off.

Zelensky said a disaster was averted by backup diesel generators while calling for more pressure from world leaders to force Russian troops away from the nuclear plant axis.

“The key thing is international pressure is needed that will force the occupiers to immediately withdraw from the territory of the Zaporizhzhia nuclear power plant,” he said.

“The IAEA and other international organizations must act much faster than they’re acting now. Because every minute the Russian troops stay at the nuclear power plant is a risk of a global radiation disaster,” he said, referring to the United Nations nuclear watchdog.”

However, Vladimir Rogov, a Russian-appointed official in the occupied town of Enerhodar near the plant, blamed the Ukrainian armed forces for the incident.

“This was caused by the disconnection of power lines from the Zaporizhzhia nuclear power station as a result of provocations by Zelenskiy’s fighters,” he was quoted as saying.

“The disconnection itself was triggered by a fire and short circuit on the power lines.”

Zaporizhzhia nuclear plant is Europe’s largest and it fell under Russian control in the earlier days of the war.

Russia and Ukraine have been at war since Vladimir Putin ordered the invasion of the neighbouring country earlier this year.

All attempts at peace are yet to yield a lasting ceasefire between the two countries.