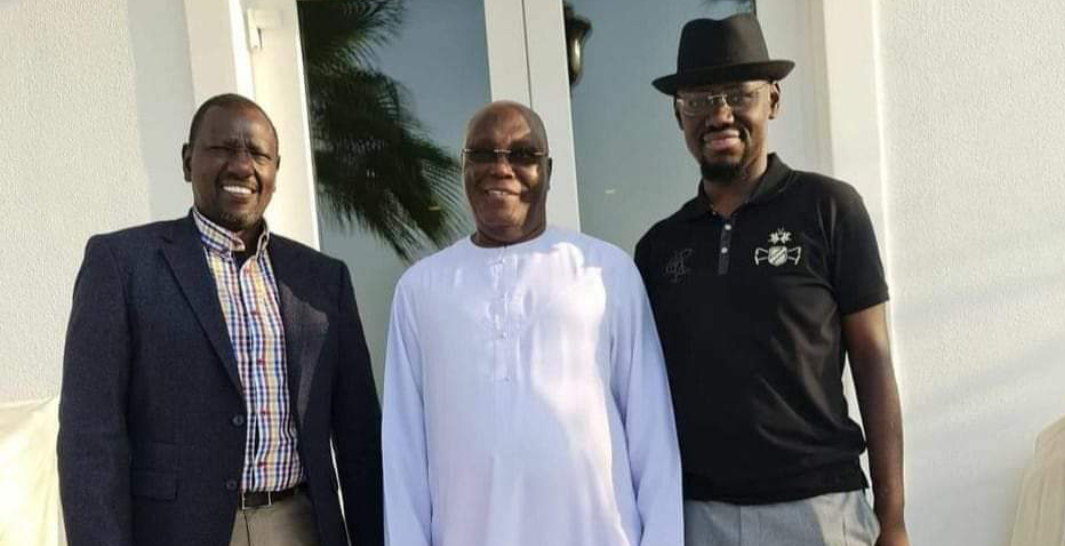 Former Nigerian vice president and flag bearer of the Peoples Democratic Party in the 2023 presidential election, Atiku Abubakar and Kenya’s president-elect, William Samoei Arap Ruto have been named among prominent individuals under investigation by INTERPOL on money charges.

Ruto served as the deputy president of Kenya since 2013. In the 2013 presidential election, he was elected the Deputy President alongside President Uhuru Kenyatta under the Jubilee Alliance ticket.

Now, Interpol’s investigation has revealed how the billions were moved into Kenya from Nigeria between October and November 2020 in a suspected racket in which four other Nigerians were named.

One of the Nigerians, identified as Alexander Ezenago, is a banker, and lecturer based in Dubai where Atiku presently resides. He was named as the suspected operations manager and money laundering advisor. He was reportedly found to have transferred money to Ruto and later married the president-elect’s daughter.

The three other Nigerians allegedly bought Bitcoins worth Sh5 billion in multiple countries, including at Kenya’s crypto exchange BitPesa.

A statement filed in a European investigation reveals that between August and September 2020, the Nigerians – Mr. Olubunmi Akinyemiju, Mr. Olufemi Olukunmi Demuren, and Mr. Eghosasere Nehikhare went on a shopping spree, purchasing Bitcoins at BitPesa and other exchanges, including Binance in the US and Busha in Nigeria.

According to reports, the money they used to purchase the cryptocurrencies was wired from their RemX Limited bank accounts in Kenya, RemX Inc, which is registered in the US, and RemX Nigeria.

Investigators believe the trio then redistributed the crypto to individual wallets to make them untraceable.

European investigators believe that Ruto and Atiku were the beneficiaries of the suspected money-laundering scheme.

The Nigerians allegedly enlisted the help of Kenyans for their shopping spree, which has drawn the attention of Kenyan and European investigative agencies, who are monitoring hundreds of transactions spanning at least three continents.

The cryptocurrency purchase is believed to have happened a month before the three wired Sh25.6 billion from Lagos to a network comprising more than 10 companies in Nairobi, an indication that the Nigerians might have transacted in Kenya long before setting off alarm bells in Europe.

To skirt around the strict money laundering rules in the US, the Nigerians and their Kenyan associates wired money into an account held in their companies’ names to create the impression that they were conducting “same company fund transfers”.

Once the money got to the US, the companies used Fedwire to send the money to Binance accounts to avoid detection.

Detectives in Europe and Kenya believe Mr. Akinyemiju, Mr. Demuren, and Mr. Nehikhare enjoy the patronage of Ruto who might have been recruited to eliminate legal encumbrances that hamper the transfer of huge sums of money into and out of Kenya.

Court papers do not indicate whether there were more transactions regarding the accounts before the ARA obtained freeze orders pending the conclusion of money-laundering investigations.

Reports have also claimed that Sh15 billion might still be stuck in a local bank account and was intended to finance a mysterious transaction with a Kenyan company, Pumicells Limited.

Records at the Companies’ registry reportedly showed that Pumicells is wholly owned by a Kenyan citizen, Ms. Pauline Wanjiru Wachira.

The official contact listed for Pumicells is registered under the name Evalyne Wawira Gachoki.

Ms. Gachoki is a Director of RemX Capital Limited, whose account in a Nigerian Bank was among those frozen by the High Court early this month following an application by ARA.

RemX Capital Limited had Sh770.4 million at the time account was frozen. The company is wholly owned by Dubai-registered RemX Holding Kenya Limited.

The link between Ms. Gachoki and Pumicells indicates that she and Ms. Wachira might have been enlisted to help the Nigerian nationals move money from Nigeria and Kenya.

The ARA started investigating the suspected money-laundering ring in February after receiving information about unexplainable transactions.